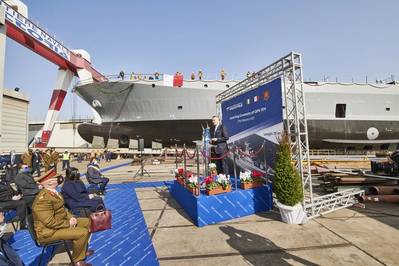 The longest Offshore Patrol Vessel ever built by Vittoria Shipyard was delivered this morning to the Maltese government by Luigi Duò, president of Vittoria Shipyard, during a ceremony that took place in the facilities of the Venetian company. Representing Malta was brigadier Jeffrey Curmi, commander of the armed forces.

The OPV P71 is a 75-m-long vessel designed and constructed by the Venetian shipyard that specializes in building ships up to 100 meters in overall length for military, paramilitary, commercial, transportation and work-related use. It is destined to become the flagship of the Armed Forces of Malta and to be used to carry out coastal monitoring operations, extended patrol missions offshore and SAR operations.

The OPV P71 is the product of a commission worth more than $59m, obtained by the shipyard via its participation in an international public bid serving the Defense Ministry of the island and co-financed (by 75%) by the EU as part of the 2014-2020 Internal Security Fund (ISF). The fund was established by the EU to implement internal security strategy, cooperation related to law enforcement and management of the external borders of the European countries.

With a full-load displacement of 1,800 metric tons, an overall length of 74.8 meters, a beam of 13 meters, a draft of 3.8 meters, the OPV P71 is ready to complement a crew of 50 and an additional 20 personnel members. The platform features an integrated bridge system in an elevated position with a 360-degree view and sheltered side passageways for personnel on the main deck and around the bridge.

The design of the OPV features a stern flight deck without a hangar but with the capacity to refuel a 7-metric ton helicopter, such as the AW139 in the service of the Armed Forces of Malta. The aft end below the flight deck has a launch and recovery control station for a 9.1-meter RHIB with additional space for supplies and personnel. There are also doors on the overhead flight deck for the loading/unloading of supplies thanks to a purpose-made davit on the port side of the ship. Another station also intended for a 9.1-meter RHIB is located on the starboard side of the platform in the central area of the vessel. Both RHIBs are capable of a maximum speed of more than 40 knots for the control of sea traffic and search and rescue operations.

The hybrid propulsion system of the P71 is based on two diesel engines, 5,440 kW each, that integrate the same number of electric motors, of non-specified power output, two shafts with variable-pitch propellers and as a whole are able to provide a speed of more than 20 knots. The new unit is equipped with a bow and stern thruster as well as active-fin stabilizers to guarantee maximum stability. Designed and built under the supervision of the American Bureau of Shipping (ABS), the P71 will be armed with a remote-controlled 25 mm gun mount and various caliber light machine guns, while the integrated command, control, and navigation system includes a 2D surveillance radar and satellite communications. 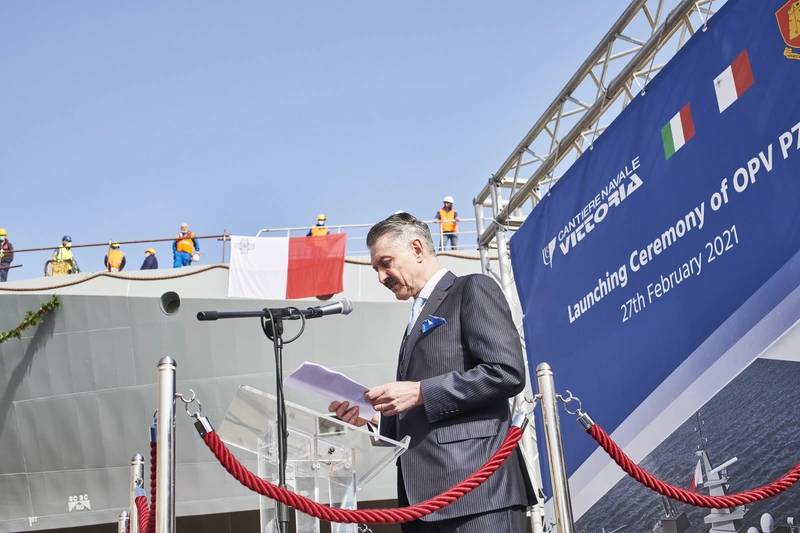