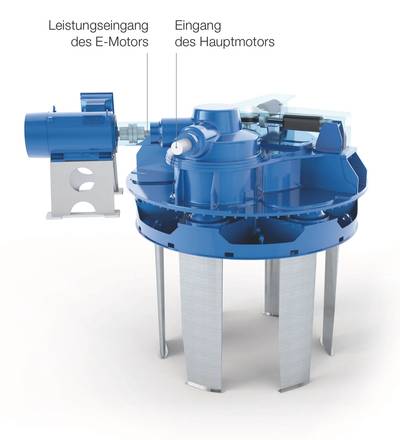 Voith rounds off its product portfolio for tugs and offshore support vessels (OSV) with the new size 34 Voith Schneider Propeller (VSP). The new design of the VSP 34 is significantly lighter and more convenient to maintain, reducing services times by up to 40 percent.

The VSP 34 is an entirely new development. It was optimized for a bollard pull of 80 tons and an input power of 3 000kW for OSV. These requirements were deducted from a large number of customer and operator workshops held by Voith. A scientific paper backed up the survey results and confirmed both core requirements.

With regard to the design, Voith decided in favor of a VSP with six blades. With this setup, higher power can be achieved at a lesser draft, and the vibration excitation is minimized. In addition, the VSP 34 was also designed for the lighter but faster-rotating high-speed diesel engines with speeds of up to 1800 rpm.

Further aims were to make the VSP 34 significantly lighter, more efficient and easier to maintain. The total weight of the new VSP 34 is as low as 65 tons. Voith engineers achieved this reduction in weight mainly by re-designing the rotor and the kinematic mechanism used for blade adjustment. Light castings adapted to the stresses and strains the VSP is subjected to now replace the heavy forgings used to date. The weight of individual components inside the rotor casing could thus be reduced by up to 65 percent.

A change in the arrangement of spur and bevel gear resulted in the VSP 34 requiring a significantly smaller and lighter bevel gear. By changing the rotor bearing from a sliding bearing to an anti-friction bearing, the breakaway torque of the VSP could be reduced significantly. This opens up new options for the design of the drivetrain. Another weight reduction was achieved by reducing the oil quantity required for the rotor casing of the VSP 34 by approximately 10 percent.

A very important new design feature is the second power input / output. For the first time, low-cost hybrid applications requiring little installation space can now be positioned right at the VSP input, even in commercial applications.

The weight reduction makes the VSP 34 more efficient during operation. Furthermore, the VSP 34 is significantly more efficient when it comes to servicing. The new design allows blade seals and all other components to be changed in less time. A reduction of service times by up to 40 percent can be achieved.

The past few months have been full of uncertainties and even as we look ahead, we don’t know exactly what the future will hold.