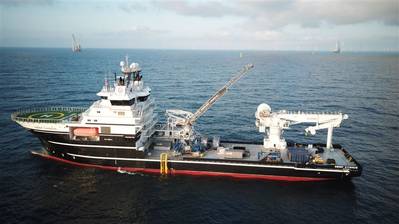 Norway's Volstad Maritime has contracted HAV Group subsidiary Norwegian Electric Systems (NES) to deliver the battery package and associated control system for battery charging to one of its subsea construction vessels.

Bergen-based NES will provide the equipment to the Deep Cygnus in connection with a forthcoming vessel upgrade to battery power notation before the vessel enters a new charter contract in early 2024.

During the past six months, Volstad Maritime has also contracted NES to deliver similar battery packs and charging system to the Volantis, Grand Canyon II and Grand Canyon III offshore construction vessels. Deep Cygnus will be the fourth vessel where Volstad orders a battery system from NES.

“We are investing significantly in upgrading and future-proofing our fleet of offshore construction vessels. Reducing the offshore industry’s CO2 footprint is a shared responsibility that we take seriously. An added benefit is that our vessels become even more attractive to customers who also want to reduce emissions associated with their offshore operations. To achieve this, we rely on close cooperation with key suppliers such as NES, who we have an open and trust-based relationship with,” said Trond Volstad at Volstad Maritime.

The Deep Cygnus is a dynamically positioned multi-role subsea construction vessel incorporating a 150t active heave compensated subsea crane. The vessel is 122 metres long and has operated in the North Sea in recent years.

“Upgrading the Deep Cygnus with a battery is similar to the upgrade we are doing onboard Volantis, where we placed the battery and charger under deck in custom-made rooms,” said Egil Bremnes, sales manager at NES.