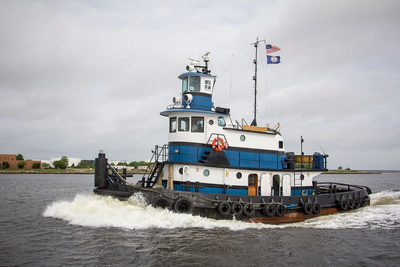 As vessel operators increasingly look at their return on investment in terms of total lifetime costs for purchasing and operating their new engines, many of them are turning to Volvo Penta, the company says.

“The word is spreading around the waterfront that Volvo Penta is the best buy for repowering. Our lineup of modern marine diesels provide a combination of faster speeds to station, better fuel economy, longer service intervals and fewer service calls, as well as industry-leading low-RPM torque performance,”  said Jens Bering, vice president of marine sales, Volvo Penta of the Americas. “What this means for vessel operators is more productivity and less downtime.”
The lobster industry is booming, buoyed by increased exports to Asia, and many lobster fishermen are taking advantage of the opportunity to repower their vessels. One of them, Justin Bruland, owner of Daddy’s Princess, out of Marathon, Fla., recently installed a pair of Volvo Penta D13 700 hp engines to replace the existing 780 hp diesels from another manufacturer. The repower was performed by FDDA, a Volvo Penta Power Center.
Bruland has since put over 300 hours on the new engines, and he sees a big difference in productivity. “In the past I’ve used about 140 gallons to take 400 traps out. Now I have 1,000 traps on the boat and I’m able to get out to our fishing spot using about 200 gallons. I’m hauling more than double the traps and using only slightly more fuel.”
Commercial vessel operators in California are taking advantage of grants available from the state to repower with cleaner-burning engines. Phil Havlicek, owner of Reel Time Charters, used grant money from the Bay Area Air Quality Management District to repower his 2000 Cabo Express with twin Volvo Penta D6 300 hp engines.
“Previously I had mechanical 350 hp turbocharged engines. They were good for their time but lacked low-end torque and were not clean burning,” Havlicek said. “With the Volvo Penta engines I have picked up fuel efficiency. I’m not seeing smoke, and they are quiet. I’m getting extra knots on the top end and most importantly a lot of low-end torque. I have a state-of-the-art boat that should last me well into my next stage of life.”
Havlicek uses the boat for salmon fishing, eco tours, sightseeing and memorials at sea. Reel Time has over 500 hours on its engines since being put back into service in July 2017.
Since repowering their 1950s-era tug Miss Anne with a Volvo Penta D16C-MH keel-cooled engine last year, W.F. Magann Corp. is pleased with the result. The engine is approaching 1,000 hours, and so far there have been no service calls. The boat is much more fuel efficient, according to Magann, and the crew especially likes the low noise level onboard.
The repower was performed by Western Branch Diesel, a Volvo Penta Power Center. “We repowered with the 650 hp 1,800-RPM Volvo Penta D16C-MH,” said Tim Walters, marine sales manager of Western Branch Diesel. “The keel-cooled engine was chosen for its fuel efficiency, weight-to-power ratio and a complementary size to the available space in the engine room.”
When the U.S. Forest Service (USFS) acquired a 1980s-vintage Zodiac RIB, the decision was made to repower with a Volvo Penta D4 225 hp Aquamatic engine. The installation on the 28-ft. RIB, overseen by Helmut’s Marine, includes a Volvo Penta Glass Cockpit System, which gives the operator a full overview of engine data and control of navigation with touchscreen displays.
On Lake Tahoe the boat has been used for training USFS staff, and was taken to the Oroville dam disaster in early 2017.
“The new Volvo Penta engine, combined with the drivetrain, weight and torque allow us to get up to speed and cross wakes easily with stability,” reported Joe Cook, patrol captain for the USS Tahoe National Forest and Lake Tahoe Basin Management Unit. “It has performed excellently. This was the boat everyone wanted to be on during training. We all really noticed how stable the boat was and the power we were getting from the engine.”
“Without doubt, a key driver of our surging repower business is our extraordinary network of Power Centers and servicing dealers backed by our factory service engineers,” said Bering. “A common denominator in all these repower stories is that local service and technical support is absolutely critical.”
Bruland, Daddy’s Princess’ owner, said that the customer service and support from FDDA has been great. He only experienced one minor issue, which was resolved right away – on a Sunday. Havlicek agrees.
He said the team at Helmut’s Marine made the whole process of securing the Air District grant and installing the new engine easy and seamless.
“We’re investing heavily in ongoing training for technicians to strengthen our worldwide service network,” Bering said. “We’re continually expanding our training courses, both at our in-house training center and at strategic remote locations. In the last year alone, more than 1,000 technicians attended our schools.”
• Americas • California • Florida
Email

As sometimes happens with boats in the maritime world, the recent repower of a tug shone a light on a pair of well known independent companies.