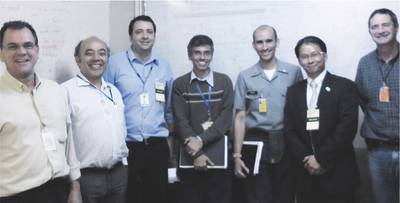 For decades, Vulkan  has been a supplier of couplings, not only for Brazilian offshore industry, but also for military applications. Here business mainly focused on conventional drives such as diesel-electric systems for military ships and submarines. Now Vulkan is positioning itself on the Brazilian market as a system solution provider for nuclear propulsion and supply the Centro Experimental Aramar in Iperó with a RATO S 731T and 14 elastic mounts.

The Brazilian government is currently planning the construction of a fleet of six submarines with nuclear propulsion. The existing fleet of five diesel-electric powered submarines, four of the Tupi class and one of the class Tikuna. The objectives of these underwater operations are namely in the Atlantic Ocean off the Brazilian coast: the yet to be constructed oil rigs for the oil fields recently found in Santos, Campos and Espirito Santo. The oil fields located up to 350 kilometres off the coast can be found from a water depth of over 3,000 meters. Preliminary estimates suggest that 50-100 billion barrels of oil can be found there. The Navy is planning a comprehensive armament program to protect these oil sites. The construction of the whole fleet, which includes 20 conventional submarines, is due to be completed by the year 2047.

The planned nuclear submarine however remains the most ambitious projects: with 6,000 tons and 96.6 meters in length, the construction will take up to eleven years. It will be driven by a nuclear reactor developed at the Marine Research Center Aramar. A land prototype for the entire drive of the nuclear submarine boat is currently under construction -– in a size ratio of 1:1 to the original drive to be built later. Once this test phase has concluded, the entire submarine will be completely assembled for testing purposes in a multiple-story building. For the drive test rig, Vulkan  has delivered in cooperation with the subsidiaries Vulkan do Brasil and Vulkan Italia a RATO S 731T and the elastic mounts. "For decades, Vulkan has successfully participated worldwide in many marine projects already via the French DCNS (a world leader in naval defence and innovator in the energy sector). We have a very good reputation because of many submarine projects in Europe, Asia and Australia", says Eric Boon, responsible sales team and driving force behind the submarine project. Not only the long-standing successful cooperation of the Brazilian Vulkan subsidiary with the officials at the Brazilian Navy, but also another current project predestine Vulkan to be the preferred coupling supplier: In 2008, Brazil ordered four submarines of the Scorpène class as part of its armament programme, which will be supplied from 2017. For the diesel-electric main propulsion of the first submarine of this class, the S40 "Riachuelo", Vulkan has already delivered a RATO S 48. A further coupling for the second of the four submarines is currently in production.