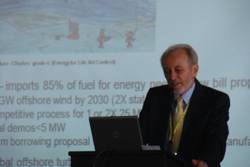 “Despite a long-term decline in oil & gas production in the North Sea, its services and support industry has a bright future,” said John Westwood, Chairman of energy business advisors Douglas-Westwood, in Aberdeen this week.
Addressing a major event organized by the Norwegian British Chamber of Commerce on opportunities and challenges for the industry in the North Sea area, Westwood noted that the North Sea is a major world-class basin that for the past 40 years has delivered huge economic benefits to Norway and The UK.
“However, oil & gas production is in decline,” he said. From its peak a decade ago Norwegian total production is down some 32% and the UK 46%. Despite recent discoveries and development announcements it will not recover to historic highs.
“Norway is of course in a better position than the UK due to its slower depletion policy, recent significant finds and also it has the ‘High North’ – the arctic promises major opportunities, but at a price.
“The continuing challenge for both countries is to greatly slow production decline by focusing on maximizing recovery from existing fields and the multitude of small fields that remain untapped and extensively explore the northern & western frontiers.”

OFS boom
“But in the decades ahead it will be the support industry that has developed to serve North Sea oil & gas, that will ultimately deliver greater economic benefit than the oil & gas itself,” Westwood continued.
Both nations have built major oil & gas services industries and developed world-class technologies and this combination is the legacy that will outlive local reserves. Large volumes of products & services are already exported and both Aberdeen and Stavanger have become world-class industry centres.
“As evidence of this, consider the reason we are all here today – the Offshore Europe Conference & Exhibition. At the peak of North Sea production a decade ago the show attracted some 24,000 people. In 2009 it was 48,565 and this week it may exceed 50,000 people from 110 countries.
“So whilst oil & gas production in the region is slowly declining the international importance of the oilfield service industries that have evolved here in the North Sea is increasing.”

People problems
Moving on to address issues facing the industry, Westwood stated, “The most significant problem both nations’ industries face is people. The baby-boomers are retiring, many young people are under-educated or have zero-value qualifications and those that are capable are often reluctant to enter an industry perceived as lacking in green credentials.
“The oil & gas industry clearly offers our young people a fantastic future, but is anyone in the education system telling them?
“In the UK the problem has been that despite some good teachers, schools & universities the education system itself has proven itself totally unfit for purpose. Let’s hope that the current government will prioritize addressing this fundamental problem.
“In the case of my own company and many others, our growth is restricted not by the market, but by the difficulties of finding entrants with the basic skills, such as writing in the English language.
“At the other end of the skill spectrum many companies’ solutions to attracting experienced manpower is to steal from others, thus creating cost inflation in an already high cost area – but still not addressing the underlying issue.
“Pulling together operators & OFS companies to force an education & training culture is essential to assure the future. Undoubtedly the training sector is a great commercial opportunity.
“But here in the UK, the industry is not united. Instead we have a gaggle of trade bodies and special interest groups. There is no forum really representative of both operators and service companies, no united voice, and specifically nothing with the necessary size to impact government thinking and ‘educate’ the wider stakeholders – the government and the general public – to the importance of this industry,” he commented.

But Many Opportunities
“There are still, of course, major exploration & production opportunities in the North Sea and there will be for many years but the larger long-term future lies in other regions and other often non-E&P sectors.
“Examples include: Decommissioning – in the UK alone, some 2.4 million tonnes of steel platforms will have to be returned to the shore over the next 25 years at a cost exceeding £20 billion. But let’s not be too hasty, it is this existing infrastructure that will facilitate the addition of future small local finds.
“Onshore oil & gas – we forecast a massive expansion of activity over the next five years. Yes, as proven by leading Aberdeen companies, many of our offshore skills can be employed onshore.
“Unconventional gas – European onshore reserves are estimated to be a multiple of those of conventional gas. And natural gas is the fuel of the future.
“Offshore wind – this logical area for employing offshore oil & gas skills is beginning a period of massive growth. We estimate that 3,000 turbines will be installed at a cost of €38 billion.
“But the essential ingredient for long-term success is long-term thinking. The failures of short-termism were, in my opinion, at the core of the global financial crisis. The recent changes in UK E&P taxation are another example of this short term thinking at treasury level.
“Taxation of North Sea oil & gas must be internationally competitive, but both BP and Statoil’s recent investment announcements suggest that now, for many operators, it probably is.
“And yesterday’s announcement by the UK oil minister, Charles Hendry, of an industry/government tax forum is a welcome development.
“The bottom line is that oil & gas will dominate our energy consumption for several decades and declining supplies of cheap oil will mean oil prices will stay high or go higher.
“The oil & gas industry offers a fantastic future for our children and theirs. But companies and governments must show leadership, accept the realities and plan accordingly, that is for a timeframe of decades, not days!”