As the maritime industry moves toward designs and technologies that minimize emissions, the 197- by 32-meter, 2,500-TEU Trade Winds ship design combines six Oceanwings wind-assisted propulsion sails with liquefied natural gas (LNG)-electric propulsion with pods. The wing sails are installed on a vertical sliding mechanism to retract them partially while the vessel is in port, minimizing the impact on cargo operations. The LNG storage tank is based on GTT’s Mark III containment system, and the LNG power plant is designed with pure gas four-strokes gensets only. This architecture is engineered to be flexible, offering the possibility of future upgrade to carbon-free fuels such as ammonia or hydrogen.

Designed to be suitable for short sea shipping operations or feedering in Europe, Central America, Caribbean and China, the Trade Wings 2,500 can also operate on transatlantic trades. The design minimizes time in port operations, as maneuverability is increased with the pods, and the hatch coverless design further speeds up cargo operations.

According to the designers, on a typical 4,000-nautical-mile transatlantic route, the Trade Wings 2,500 will save on average 35% CO2-equivalent emissions compared to a conventional design, with a two-stroke engine, single shaft and without wing sails, at the same speed. Out of these 35% savings, the Oceanwings accounts to 57%, the optimized LNG thermal propulsion delivering the remaining 43% savings, according to the designers. 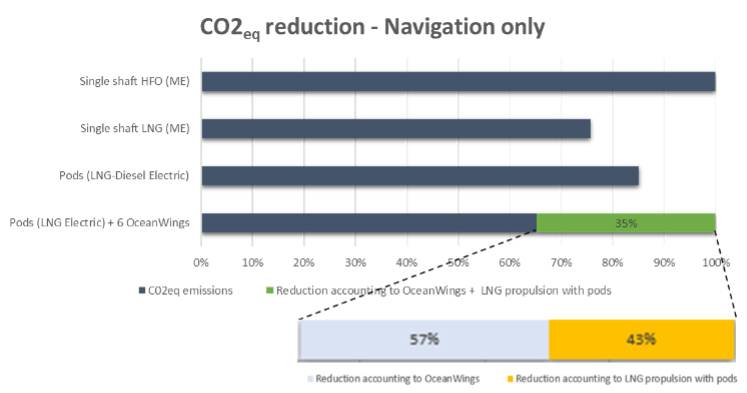 ABS Publishes Guidance on the Use of Biofuels in Shipping