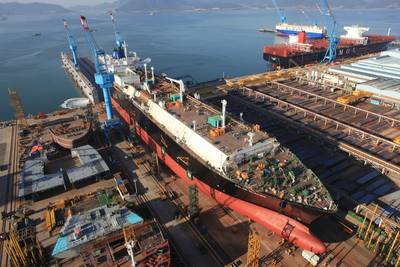 The vessel, designed for delivering chilled natural gas, was ordered by Golar of Norway in February, 2012. It, measures 289 x 45.6 m with a 26 m depth, and is scheduled to be handed over to the owner by late July 2014 after outfitting and painting work.

After about 270 large blocks, LNG containment system, an engine, a propeller are manufactured and assembled in the on-land shipbuilding area equipped with a 1,200-tonne gantry crane, four jib cranes and a floating dock, the assembled LNG carrier is loaded out onto a floating dock by hydraulic skidding, then the LNG ship is launched out by submerging the floating dock. Striking balance of the LNG carrier, which is about 30% heavier than other type of ships, on the hydraulic skidding facility and on the floating dock is the critical point of launching.

Though this is the first LNG carrier Hyundai Samho has built using the on-ground method, the company has already built 50 other ships using this method since May 2008.