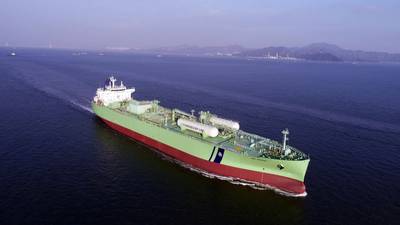 The shipowner said the 2015-built BW Gemini achieved "a historic milestone" as the world’s first VLGC to be fueled by LPG, after its main engine was retrofitted from a MAN B&W 6G60ME-C9.2 type to a MAN B&W 6G60ME- LGIP dual-fuel type capable of operating on both LPG and traditional fuel oil.

"The retrofitting process at Yiu Lian Dockyard in Shenzhen, China, took approximately 60 days and is estimated to have emitted 2,060 tons of carbon dioxide. This is approximately 97% lower when compared to ordering a newbuilding with similar technology," BW LPG said.

The 225-meter-long, 84,134-cubic-meter-capacity BW Gemini is the first of several BW LPG carriers to be retrofitted for LPG propulsion. The shipowener, part of the BW Group, has committed to retrofitting at least 12 of its VLGCs with dual-fuel LPG engines through 2020 and 2021. The vessels slated to be converted include BW Leo, BW Libra, BW Orion, BW Balder, BW Njord, BW Var, BW Tucana, BW Brage, BW Volans, BW Freyja and BW Frigg.

Pontus Berg, BW LPG Executive Vice President, Technical and Operations, said, "LPG is powering our vessels while protecting the environment. With over 80 years of experience in LPG handling, we look forward to demonstrating its benefits to the industry and prepare for the future of zero-carbon propulsion.”

"Decarbonization is one of the industry’s main challenges and a core commitment of BW LPG in the pursuit of sustainable development. Using LPG as fuel for propulsion is a pioneering and promising solution for sustainable shipping," the company said.