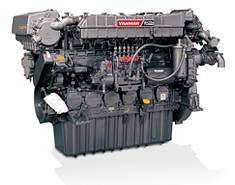 In fiscal 2013, economic growth in Asia was stilted by China’s worsening financial problems and political turmoil in Thailand. On the other hand, the United States’ recovery continued, and Europe’s economy experienced an upward swing, suggesting that developed nations are on the path to recovery.

In Japan, the economy held strong due to a buying frenzy among consumers before the rise in consumption tax, and increases in European and American demand drove up exports. Devaluation of the yen and high stock prices also helped economic recovery. However, drops in Japanese domestic demand are projected post-consumption tax increase.

Against this background, in April 2013, the Yanmar Group shifted to a pure holding company structure in order to improve the group’s management and strengthen competitiveness. Yanmar’s major activities in fiscal 2013 were as follows:

Fiscal 2013 Results
Ensure Further Business Growth
•    Started a comprehensive project for the elevation of the Yanmar brand to premium standards, with a focus on improving products, after-sales service and overall communication channels.
•    Increased local manufacturing in Southeast Asia and China, expanding sales operations in the region.
•    Provided services focused on conducting regular inspections and maintenance to diminish machine downtime, and developed new products and services that utilize ICT.
•    Constructed and started employment of a global business management system.
•    Formed a plan for an environmentally sustainable business model that supports the development and maintenance of communities and society.
•    Performed mergers and acquisitions aimed at expanding business domains.