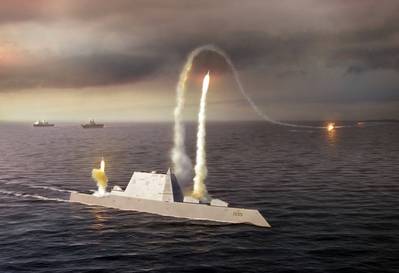 Volume fire support comes from significant gun systems on the ship to provide support right to ground forces and precise targets ashore to help the Navy and those ground forces in that type of combat area.

The power and propulsion is an integrated power system, designed with a 78 megawatt system.  The main propulsion, auxiliary propulsion, and the advance induction motors actually provide all of the power for the ship. In addition to typical ships today where main generators support movement of the ship and other generators support the combat system and the ship systems, this is an integrated system of power, and that one system which is redundant throughout the ship supports all those mission areas as well as propulsion. The benefit of that is to not have to upgrade the ship in the future to provide more power capability if more power is needed for combat systems.

The key difference, other than the power and the missiles, is it’s much harder to detect the ship.  The ship is specifically designed with a 50-fold radar cross section reduction from our prior ships, which allows it to get closer to land for closer, to more closely project power ashore as it moves closer to land.