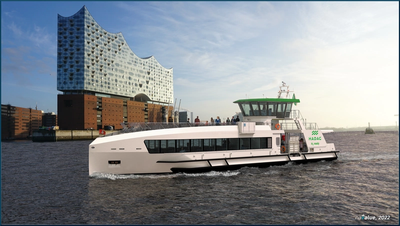 Danfoss Power Solutions said its Editron division has been chosen to provide drivetrain systems for three hybrid passenger ferries that will operate on the Elbe River in Hamburg, Germany. German shipyard Schiffbau- u. Entwicklungsgesellschaft Tangermünde mbH (SET) will build the vessels for Hamburg transportation company HADAG, expanding its fleet to 29 ships.

Hamburg’s passenger ferry service is integral to its public transportation offering. With eight routes stopping at 20 different piers, the ferries are used by approximately 9 million passengers annually. The city is looking to decarbonize its transportation sector, which was responsible for 29% of its total emissions in 2018. Hamburg is part of the Carbon Neutral Cities Alliance and has set a goal of achieving a 55% reduction in emissions by 2030, with a minimum reduction of 95% by 2050.

The first ferry, which will be capable of carrying up to 250 passengers, is due to be delivered to HADAG in 2024, with the other two vessels expected to follow later the same year. Additionally, HADAG has an option to order a further three ferries featuring the fuel cell technology, while the system could also potentially be retrofitted on the city’s existing passenger ferry fleet.