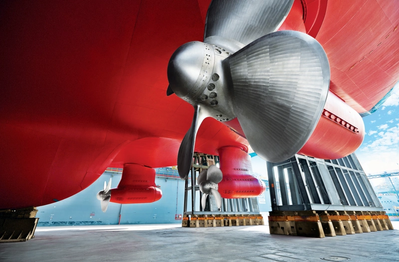 South Korean shipbuilder Daewoo Shipbuilding & Marine Engineering (DSME) has awarded ABB a contract worth more than $300 million for the delivery of a power and propulsion package for six new liquefied natural gas (LNG) carriers that will transport LNG along the Northern Sea Route.

According to ABB, each of the six newbuild vessels will feature a trio of ABB's largest and most powerful Azipod propulsion units ever supplied for ships operating in ice.

Together, the giant 17 MW Azipod units will provide a total power of 51 MW (68,400 HP), enabling the vessels to navigate safely through ice up to 2.1 m thick. In similar conditions and without ABB’s leading technology, comparable ships would require icebreaker assistance, ABB said.

The Azipod propulsion system, where the electric drive motor is in a submerged pod outside the ship hull, can rotate 360 degrees to boost maneuverability, which is particularly crucial for vessels operating in ice. The new LNG carriers will be classed to ARC7 – the highest ice class rating for merchant vessels.

The order follows the delivery of ABB’s technology for the 15-ship series servicing the Yamal LNG project – one of the largest orders ever for ABB Marine & Ports, completed in 2019.

Upon delivery starting from 2023, the six vessels will service Novatek's Arctic LNG 2 project – one of the largest industrial projects in the Arctic – and will each have the capacity to transport 170,000m3 of LNG.