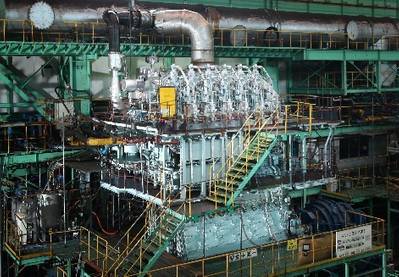 This Low Pressure EGR system is developed under the Class NK’s “Joint R&D for Industry Program” scheme. The adaptation of the low pressure EGR system that recirculates exhaust gas after a turbocharger is the world’s first effort for marine low speed two-stroke diesel engine.

MHI-MME’s Low Pressure EGR system can change combustion condition inside an engine and suppress NOx generation by means of recirculating a part of low pressure exhaust gas emitted from an engine turbocharger outlet to a turbocharger intake after scrubbed by the EGR scrubber. Its advantage is that it keeps both initial and running costs lower than a high pressure EGR system which utilizes high temperature and high pressure exhaust gas. We duly confirmed that performance such as fuel oil consumption and NOx satisfied the intended objectives through performance confirmation tests executed at Kobe Diesel Co., Ltd. in April 2015.

Hereafter, the engine will be installed to a 34,000DWT Bulk Carrier (the owner is Shikishima Kisen K.K.) now being built at The Hakodate Dock Co., Ltd. and conduct a long-term durability tests during the sea trial and commercial voyages. Additionally, we will also confirm and evaluate the availability of caustic soda, sludge disposal handling process, certification process and others in collaboration with NYK Bulk & Projects Carriers Ltd. (the operator) / Nippon Yusen Kabushiki Kaisha besides Shikishima Kisen K.K. We will improve the whole system and prepare for the future business based on the field service results, expanding Tier III market. The installation of the Low Pressure EGR system adapted IMO NOx Tier III into a vessel will be the world’s first effort for marine low speed two-stroke diesel engine.

*Note: the IMO NOx Tier III regulation
The International Convention for the Prevention of Pollution from Ships (MARPOL) was adopted at IMO for the purpose of the prevention of pollution of the marine environment by ships. MARPOL Annex VI entered into force on 19 May 2005, then the amendment of the Annex VI was adopted at MEPC58 (58th Marine Environment Protection Committee) held in October 2008, and entered into force on 1 July 2010. Now Tier II regulation is applied to ships keel laid on or after 1 January 2011. The Tier III regulation, which provides the reduction of the NOx emission by approximately 76% compared to the Tier II regulation within ECA (Emission Control Area), will be applied to ships keel laid on or after 1 January 2016.

With its TMON(Oil lubricated, +) notation, DNV said it becomes the world’s first classification society to provide a qualified…