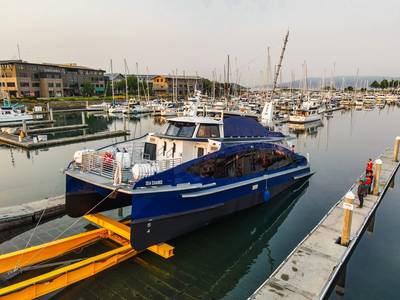 The United States' first zero-emissions, hydrogen fuel cell-powered, electric-drive ferry has been launched and is gearing up for operational trials off the U.S. West Coast.

Constructed by Bellingham, Wash. shipbuilder All American Marine, Inc. (AAM), SWITCH Maritime's 70-foot newbuild Sea Change will operate in the California Bay Area as the United States' first hydrogen fuel cell vessel, developed to demonstrate a pathway to commercialization for zero-emission hydrogen fuel cell marine technologies. While still working on permitting of hydrogen fuel systems for maritime vessels with the U.S. Coast Guard, the completed ferry will exhibit the viability of this zero-carbon ship propulsion technology for the commercial and regulatory communities.

The project is funded by private capital from SWITCH, an impact investment platform building the first fleet of exclusively zero-carbon maritime vessels to accelerate the decarbonization and energy transition of the U.S. maritime sector. “By working closely with the U.S. Coast Guard, with innovative technology partners, and with best-in-class shipyards such as All American Marine, we can make the transition to decarbonized shipping a reality today,” said Pace Ralli, Co-Founder and CEO of SWITCH. “We don’t have to wait.”

SWITCH’s mission-driven platform seeks to work with existing ferry owners and operators around the country to help facilitate their adoption of zero-carbon vessels to replace aging diesel-powered vessels, leveraging significant experience from the technologies used in the build of this first ferry. 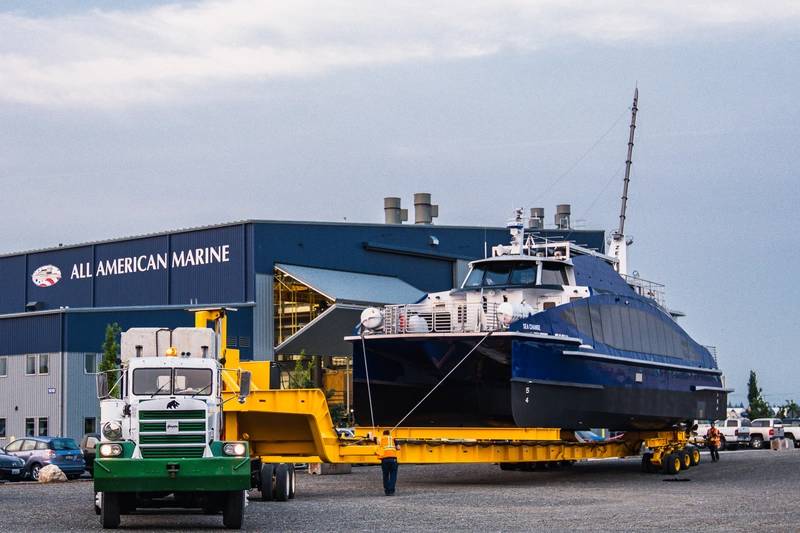 The vessel is equipped with a hydrogen fuel cell power package provided by Zero Emissions Industries (formerly Golden Gate Zero Emission Marine), comprised of 360 kW of Cummins fuel cells and Hexagon hydrogen storage tanks with a capacity of 246 kg. This system is integrated with 100 kWh of lithium-ion battery provided by XALT and a 2x 300 kW electric propulsion system provided by BAE Systems. The hydrogen fuel cell powertrain system affords the same operational flexibility as diesel with zero emissions and less maintenance. The vessel design originates from Incat Crowther, and the construction supervision and management is led by Hornblower Group.

“Hydrogen-fuel cell technology will prove to be a robust alternative to conventional powertrain technologies,” said Ron Wille, President & COO at AAM, a leading builder of hybrid-electric vessels in the United States. “AAM is continuing our tradition of building vessels on the leading edge of technology using advanced propulsion methods, which is why we are so proud to have to completed construction on such a revolutionary vessel.”

This project has received municipal support including a $3 million grant from the California Air Resources Board (CARB), administered by the Bay Area Air Quality Management District (BAAQMD), that comes from California Climate Investments, a California statewide initiative that puts billions of Cap-and-Trade dollars to work to reduce greenhouse gas emissions, strengthen the economy, and improve public health and the environment – particularly in disadvantaged communities. Additionally, the project received the first ever loan guarantee under BAAQMD’s Climate Tech Finance program, which seeks to reduce greenhouse gases by accelerating emerging climate technologies. In partnership with the California Infrastructure Economic Development Bank and the Northern California Financial Development Corporation (NorCal FDC), the Climate Tech Finance team led a technology qualification and greenhouse gas analysis that deemed SWITCH eligible for a loan guarantee. This loan guarantee supported SWITCH in securing a $5 million construction and term loan with KeyBank, which enables SWITCH to bring this important project to completion. 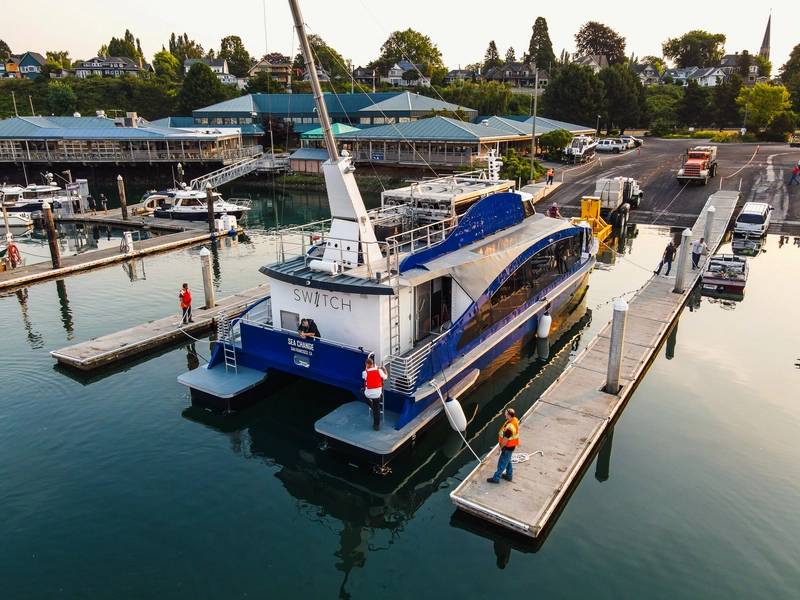