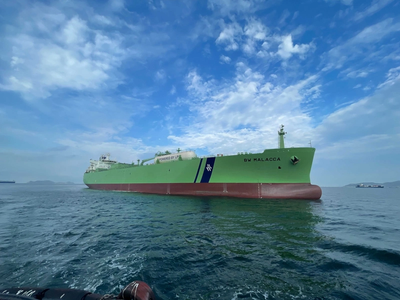 The work was carried out at Yiu Lian Dockyards in Shenzhen, China in conjunction with the vessel’s scheduled, five-year docking and under the supervision of MAN PrimeServ, MAN Energy Solutions’ after-sales division. The BW Malacca has since passed sea trials.

According to MAN, with LPG as a marine fuel, the BW LPG carriers’ output efficiencies rise by around 10% against fuel oil, which will in turn generate notable gains in total voyage fuel-economics.

"By leveraging LPG as a marine fuel, BW LPG’s vessels benefit from savings due to lower fuel consumption and full dual-fuel flexibility, which guards against price sensitivity to post-2020 fuel-price fluctuations. Furthermore, the ability to use LPG cargo as a supplemental fuel source also reduces time and fees for fuel bunkering," MAN said.

Pontus Berg, Executive Vice President (Technical) at BW LPG, said: “We could not have accomplished this ambitious project on our own. Our success lies in close collaboration with many experts in their field – MAN Energy Solutions and Yiu Lian Dockyards are two of many partners we thank for their support over the years. BW LPG now serves customers with the world’s largest fleet of LPG dual-fuel propulsion LPG carriers. Powered by LPG, these vessels are not only making tangible reductions in carbon emissions, but also helping our bottom-line in terms of savings on compliant fuel expenses in a high-cost supply situation.” 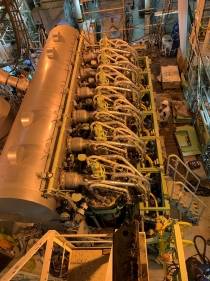 Michael Petersen, Senior Vice President and Head of PrimeServ Denmark at MAN Energy Solutions, thanked BW LPG and Yiu Lian Dockyards for their excellent cooperation and said: “It’s very satisfying that this series of conversions has been successfully concluded with all options exercised and within the agreed timeframe – despite pandemic restrictions. Retrofitting these ships also avoids the unnecessary building of additional tonnage.”

MAN Energy Solutions said that ME-LGIP engines have now surpassed 120 orders, with 35 already in service, with the vast majority of current orders for LPG carriers over 30,000 cubic metres with ME-LGIP technology, enabling these vessels to use their own cargo as fuel.

Petersen said: “As a low-carbon fuel, LPG is well on its way to becoming the new market standard in this segment. As we move towards a zero-carbon future amidst a strong, global push towards sustainability, these conversions showcase our dual-fuel engine portfolio that is future-proofed to handle whatever alternative fuels come to prominence in the decades ahead.”