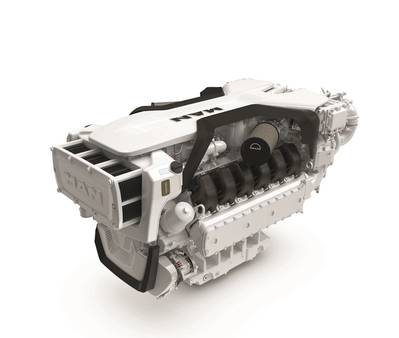 MAN Engines will present its new MAN V12X engine series to a global audience at the Cannes Yachting Festival 2022. With the newly developed V12 engine for yacht applications, MAN Engines is for the first time offering its customers an output of 2200 hp (1618 kW) from 30 liters of displacement.

"We are opening up new opportunities for shipyards with this next generation of engines. The MAN V12X can not only top existing applications, but also power new larger yachts and superyachts," states Reiner Roessner, Head of Sales at MAN Engines.

The MAN V12X is based on a completely new basic engine, incorporating many findings from the current V12 engine series, which continues to cover yacht outputs of up to 2000 hp (1471 kW). As part of the new development of the next-generation yacht engine, the engineers at MAN Engines enlarged the bore of the MAN V12X to 138 mm and the stroke to 165 mm. "MAN engines are synonymous with robustness. That’s why numerous measures have also been taken for the MAN V12X to ensure this high standard of durability and reliability, but also future-proofing," explains Werner Kübler, Head of Engineering at MAN Engines. Among other things, the wall thicknesses of the crankcase have been increased at significant points, its bolt connection between the upper and lower parts of the case has been optimized and a new crankshaft with larger bearing diameters has been installed. A great deal of attention is also paid to the findings from numerous test bench trials with correspondingly long running times and the experience gained from trials at customers on the water. In addition, findings from the E3872 stationary gas engine developed in parallel complement the development. This counterpart for power and heat generation is based on the same basic engine and was presented for the first time back at the end of 2021.

The evolution to the next generation of yacht engines is reflected in the numerous further developments that the MAN V12X features, which on the one hand are due to the significantly higher output, but on the other also play a major role in ensuring the durability of the product. For this reason, the MAN V12X in the highest output for yachts is designed for a full-load share of up to 20%.

A new coolant pump and a new thermostat housing provide the MAN V12X with an optimized coolant supply for the usual long service life of the engine. The engine is also optionally available with an outer-skin cooling system instead of the closed coolant circuit. The new, distinctive cylinder head of the MAN V12X, which has also been significantly optimized in terms of flow and cooling, is designed to meet the same development goal. In addition, the oil supply has also been modified by using new oil pumps and new oil coolers, as well as optimizing the flow.

As an additional customer benefit, in the V12X MAN Engines is using hydraulic valve lash adjustment (HVA) as standard on marine engines for the first time, which eliminates the need for regularly checking and adjusting the valve lash.

The new Common Rail injection system is another milestone that represents the excellence of this next generation of engines. With an impressive 2200 bar injection pressure, the basis is created for the low fuel consumptions and outstanding raw emissions typical of MAN engines. The engine control unit is also new and opens up further possibilities for optimal engine design. In conjunction with the exhaust gas aftertreatment system, which has also been adapted, strict legal requirements such as IMO Tier III are met. The MAN V12X is also available in combination with the hybrid system from MAN Engines, the "MAN Smart HYBRID Experience".

The compact installation dimensions of 2235 x 1250 x 1320 mm (length x width x height), which are almost identical to those of the MAN V12 series with 24 litres, are advantageous for new builds as well as for remotorization projects. Despite numerous measures to ensure the robustness of the new engine, the MAN V12X with its 2720 kg (dry) is positioned as a lightweight in the field of twelve- and sixteen-cylinder yacht engines over 2000 hp. With 0.81 hp (0.59 kW) per kilogram of dry weight or 74.3 hp (54.6 kW) per liter of displacement, the MAN V12X – like all powerful MAN engines – also stands for an excellent power-to-weight ratio while requiring little space.

To comply with the IMO Tier III emissions regulation, MAN Engines relies on the components of its proven modular exhaust gas aftertreatment system, which has been further developed for high outputs and whose technology has been used by MAN Engines in industrial engines since 2015 and in the marine sector since 2019. The modular EGA allows for a wide range of installation possibilities, as the individual SCR catalytic converter components can be positioned differently, enabling flexible system integration tailored to specific customer needs. However, it is not just compactness and flexibility that this essentially maintenance-free exhaust gas aftertreatment system has to offer – it is extremely lightweight, too.

In addition to complying with current emissions regulations, the MAN V12X is also already an integral part of MAN’s sustainability strategy: "In the first step, we use existing solutions such as dual fuel hydrogen technologies or regenerative diesel to reduce CO2 emissions. Our hybrid system, the ‘MAN Smart HYBRID Experience’, offers an entry point into the electrification of marine drives – including for the MAN V12X. For the future, we will continue to draw on the group’s expertise and further develop suitable solutions for our customers," says Mikael Lindner, Head of MAN Engines.

The first example of the MAN V12X will be on display from 6th to 11th September at the Cannes Yachting Festival 2022 at the MAN Engines stand, Jetée 173, Vieux Port.