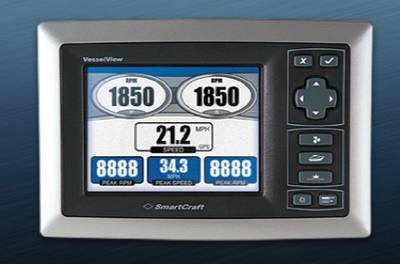 Mercury Marine point out that VesselView has long been recognized as the premier engine-information display system in the recreational boating industry. Several additional features – including ECO-Screen, Smart Tow, gateway, Troll Control and a new contemporary design – are integrated into the new models to further solidify that reputation.

Boaters can achieve optimal fuel economy with the ECO-Screen feature, named “Green Product of the Year” by West Marine in 2010. ECO-Screen provides recommendations for optimal trim and rpm adjustments to improve fuel efficiency by up to 20 percent.

Boaters who participate in waterskiing, tubing or wakeboarding will benefit from the Smart Tow feature. Regardless of who is captaining the boat, tow sports enthusiasts are certain to experience the perfect launch time after time thanks to user-selectable profiles that control launch and cruising speed.

Anglers will appreciate the Troll Control feature, which allows the captain to set and control the engine trolling speed without using the throttle. Troll Control maintains steady speeds and can be increased or decreased in 10 rpm increments.

A diagnostic scan is also performed and displayed when the engine is started to ensure peace of mind prior to leaving the docks. While under way, simple icons and built-in intelligence ensure the user has the necessary information when it’s needed.

VesselView 7, which can monitor up to four engines, may double as a chart plotter and support accessories such as radar and sonar, when paired with a Lowrance or Simrad chart plotter or Mercury NMEA 2000 GPS antenna. A video input provides an option to install a back-up camera for improved vision during docking or while maneuvering in reverse.

VesselView 4 and VesselView 7 are compatible with SmartCraft-ready Mercury outboards 40hp and above, MerCruiser engines, Mercury Racing engines and Mercury Diesel engines. Both models display information in 16 languages. The new displays will be available for purchase in May of 2013.