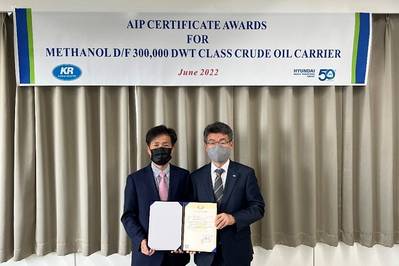 The methanol dual-fuel VLCC, which was developed under a joint project between KR and shipbuilder Hyundai Heavy Industries (HHI), is powered by methanol and marine gas oil (MGO). HHI has developed the vessel so that the methanol fuel tank can be placed in either the open deck or the cargo area and KR has verified the safety and suitability of the vessel’s design, ensuring it complies with domestic and international regulations.

Several of the world’s leading shipping companies have placed orders for vessels that use methanol as a dual fuel as interest in the cleaner burning fuel continues to grow amid the maritime industry's push to reduce vessel emissions.

Methanol is considered to possess high potential for commercialization because it offers fewer technical difficulties than liquefied natural gas (LNG) and relatively less toxicity than ammonia. Methanol can be stored in a liquid state at room temperature, similar to bunker oil, making it easier to store and transport compared to LNG, hydrogen and ammonia, which turn into liquid state at –162°C, -253°C, and –34°C respectively.

At present, the proportion of LNG-fueled vessels continues to increase due to the fuel’s mature technology and supply infrastructure, but further transition to decarbonized alternative fuels is needed as strengthened greenhouse gas emission regulations come into force, KR said.

And while most methanol produced today is derived from fossil fuels, the proportion of e-methanol is expected to increase as its fuel supply sources continue to expand, making it a much more competitive next-generation marine fuel along with green ammonia.