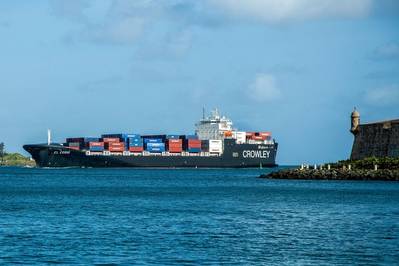 El Coquí, one of the world’s first ConRos powered by LNG (Photo: Crowley)

Tough new rules on marine fuel are forcing shipowners to explore liquefied natural gas as a cleaner alternative and ports such as Gibraltar are preparing to offer upgraded refueling facilities in the shipping industry's biggest shake-up in decades.

From 2020, International Maritime Organization rules will ban ships from using fuels with a sulphur content above 0.5 percent, compared with 3.5 percent now, unless they are equipped to clean up sulphur emissions. This will be enforced by fines levied by the IMO's member states.

Using LNG to power ships instead of heavy fuel oil or the lighter marine gasoil can reduce polluting emissions of nitrogen oxides and sulphur oxides by 90 to 95 percent, according to industry estimates.

The stakes are high. Analysts at Swiss bank UBS estimate that the green shipping market could be worth at least $250 billion over the next five years.

To scoop up some that market, the British territory of Gibraltar is in the process of launching an LNG-fuelled power station whose accompanying storage tanks will also be able to be used to refuel cargo ships via barges.

Gibraltar already supplies the most marine fuel of any port in the Mediterranean and aims to do the same with LNG, said Manuel Tirado, chief executive of the Gibraltar Port Authority.

"The GPA's aim is to be the number one LNG bunker port in the Med, however, this is something that will not happen overnight," he told Reuters.

The shipping industry is under pressure to cut its emissions of the main greenhouse gas which causes global warming - carbon dioxide (CO2) - by at least 50 percent by mid-century from 2008 levels, after the IMO agreed on a target in April after years of debate.

Although still a fossil fuel, LNG emits 10 to 20 percent less CO2 than even low-sulphur fuel oil.

A period of low oil prices slowed the take-up of LNG as a marine fuel. But over the past year, as the oil price has risen, appetite has grown in the cruise ship industry as well as in the container, cargo and tanker sectors.

There are currently 125 ships around the world using LNG, according to ship certification experts DNV GL, with between 400 to 600 expected to be delivered by 2020. That is a still small fraction of a world fleet of more than 60,000 commercial ships.

Valuation company VesselsValue said 78 ships with dual-fuel engines capable of using LNG would be delivered in 2018, the largest annual number to date.

"Over the last year or so there is a growing consensus among shipowners that LNG is a reasonable next step. It is gaining traction," said Martin Wold, a senior consultant at DNV GL.

But the transition to LNG will take time, with low-sulphur oil-based fuels also used to replace heavy oil.

By 2050, DNV GL forecasts that only 47 percent of energy for shipping will come from oil-based fuels. Gas fuels will account for 32 percent, and the rest will be provided by carbon-neutral energy sources, such as biofuels and electricity.

Constraints
One of the challenges in using LNG to power ships has been the investment needed to build the required refuelling facilities. In addition, commercial vessels powered by LNG cost around $5 million more than regular ships.

Retrofitting is also costly as existing ships require space to install much bigger fuel tanks to keep the super-cooled gas from evaporating.

For Gibraltar, the construction of the new LNG power plant by Royal Dutch Shell will help to create some of the required ship refuelling infrastructure.

Tirado said authorities in Gibraltar were working on a legal framework that would allow ships to be refueled with LNG in the near future.

A Shell spokeswoman said the supply of LNG to Gibraltar "opens up the possibility for other future LNG applications in Gibraltar, such as the use of LNG as a cleaner burning maritime fuel".

Malta is studying the provision of LNG refueling facilities at its ports and other places such as Barcelona are working on providing LNG bunkering. Zeebrugge and Rotterdam are already supplying LNG via barges.

Elsewhere, several LNG bunkering vessels, from which merchant ships can refuel, have been delivered to operate in locations such as the Amsterdam, Rotterdam, Antwerp region, the North Sea, the Baltic Sea and the coast of Florida.

"We are reaching a tipping point where shipowners are starting to commit to LNG-fired ships at scale," said Maarten Wetselaar, head of integrated gas and new energies at Shell.

Planning for the Long-term
To meet the sulphur rules in 2020, shipping companies can use low-sulphur fuel, install a scrubber and continue to use heavy fuel oil, or switch to LNG.

Sulphur scrubbers can cost up to $10 million per ship and will not help lower CO2 emissions in the longer term, according to analysts at UBS.

In the future, ships could be fuelled by methanol, biofuels, fuel-cell systems or hydrogen, but these are not technologically advanced enough and very costly.

Since demand will inevitably shift to compliant fuels - low sulphur in the short-term, as well as LNG - the main losers will be refiners unless they adjust their production mix. Refuellers slow to switch away from offering heavy oil may also get caught out.

French container shipping line CMA CGM, the fourth biggest in the world, has said it has ordered nine mega vessels for delivery from 2020 which will be powered by LNG, one of several options it is pursuing.

"Replacing the entire fleet with long-term solutions will take years so the group is committed to implement several solutions during this period," CMA CGM said.