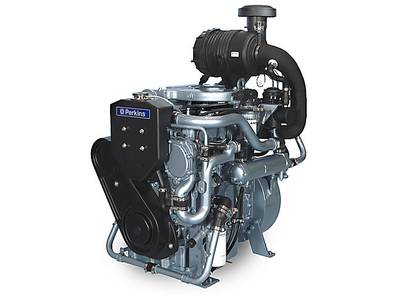 Perkins auxiliary engines are set to power Red Funnel’s Red Jet 6 generators, when she is launched in July 2016.

Two Perkins 4.4TWGM engines have been supplied to G&M TEX Ltd which has packaged them into generators. The generators, having completed build and performance testing have been despatched from Ipswich to Shemara Refit LLP in East Cowes, which have the contract for the build.

G&M TEX specializes in packaging marine generators from 10 kVA to 2500 kVA. The company procures parts from some of the highest quality manufacturers in the business to provide a working solution to suit customer requirements and constraints such as; space, weight, noise, vibration, load and demand. “The Perkins 4.4TWGM has been chosen for this new project as it is a tried and tested engine and has proven successful in numerous marine generator installations,” comments Robin Wharfe, general sales manager at G&M TEX. “We have a long standing relationship with Red Funnel having carried out various refit works replacing original generator sets on board their vessels, many of which are now powered by Perkins auxiliary engines. Although this is a new build project, Perkins has provided us with trusted reliability on previous projects which put them in a strong position for this one.”

Red Jet 6 is a 41m high speed passenger vessel operating between Cowes, Isle of Wight and Southampton. It will be the first vessel of its kind to be built in the UK in the last 15 years. The 4.4TWGM has been packaged and is now incorporated into the d-SMART75P Generator which is rated 75 kVA/60kWE, 400V, 3 phase, 50HZ. The generators have an increased output of 60kWE, in comparison to the previous boats which have generators of 49kWE.

Perkins propulsion and auxiliary engines are distributed in the United Kingdom through Finning UK, which uses selective OEM’s like G&M TEX to supply to the end user.