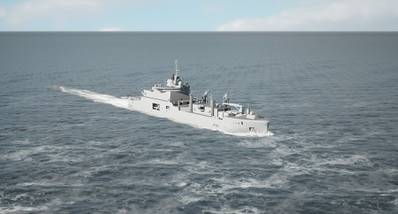 The first MV7000 drives for the LSS FLOTLOG program has successfully passed their Factory Acceptance Tests at GE Power Conversion Nancy Factory, reaching a first milestone for the new fleet of logistic support ships (LSS) of the French Navy.

It follows the contract signed in 2020 between GE Power Conversion and Chantiers de l’Atlantique to provide systems for the four LSS to be built by the Shipyard for the French Navy, under the contract management of the Organisation for Joint Armament Co-operation (OCCAR), on behalf of the French Armament General Directorate (Direction Générale de l’Armement).

The LSS main mission is to provide logistical support to deployed naval forces. It will replace the current single-hull oil tankers, which have been in service since the 1970’s and 1980’s. The four supply ships will be delivered by 2029.

By equipping these vessels with control systems similar to those installed on board other French Navy surface ships, propelled with GE solutions, the fleet will have commonalities – thereby simplifying management and maintenance for the customer.

“Electrical propulsion for naval vessels is a major trend in the maritime marketplace. With this contract, we are seeing that it is also reaching military logistics ships,” said Philippe Piron, President & CEO of GE Power Conversion. “Installing high-power electrical grids on ships is essential not only for power generation and propulsion, but also for supplying operational on-board mission systems that increasingly require electrical power. We are delighted to be able to offer our most innovative systems in terms of propulsion and power management systems to the French Navy for its future combat vessels.”