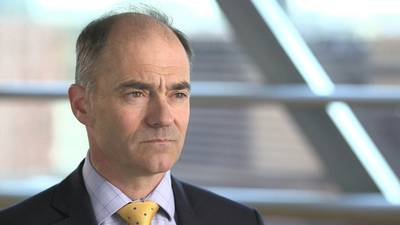 The maker of engines for civil planes, military jets and ships has been in turnaround mode since 2015. Having on Thursday announced plans to cut 4,600 jobs as part of cost-saving measures, it told shareholders on Friday the foundations were in place for it to deliver higher returns in future.

Rolls said it was well placed to exceed a target of generating free cash flow of 1 billion pounds ($1.3 billion) by 2020. In the mid-term it is aiming for free cash flow per share to exceed 1 pound, up from 15 pence per share it made in 2017.

East told investors that while the targets were just “power point” now, he was confident Rolls would make them.

“It is really all about the execution. I believe we now are prepared to execute, we’re capable of executing and we’re determined to do so,” he said.

Shares in Rolls traded up almost 10 percent at 971 pence at 1315 GMT, having earlier hit their highest level for four years, showing investors belief that East can deliver.

The former boss of chip designer ARM, East, took over Rolls three years ago when the company was laid low by multiple profit warnings due to declines in the oil price and older aero-engine programs.

His plan, to simplify the company and make it more efficient, has been taking shape over the last three years, with the most radical action taken on Thursday when he announced job cuts designed to save 400 million pounds a year by 2020.

Despite Rolls’s confidence, the engineering company remains under pressure in the near term from airline customers due to ongoing issues with parts not lasting as long as expected on the Trent 1000 which powers the Boeing (BA.N) 787.

The CFO cautioned that such issues were risks to the potential for reaching 1.2 billion pounds of free cash flow in 2020.

“We’re in the middle of managing pretty significant issues on the Trent 900 and 1000, and how that evolves, that’s a risk around the business so don’t treat that as a hard and fast number,” Daintith said.

Dividend Boost?
The new targets would represent the culmination of East’s turnaround of the company, and are designed to answer critics who have long said that Rolls underperforms rivals such as GE (GE.N), which are more profitable.

The higher free cash flow target also raises the prospect of a bigger payout for shareholders after the dividend halved in 2016. Since then Rolls has said any improved shareholder returns will be linked to its free cash flow performance.

The jump in the share price reflects the material upgrade to consensus figures implicit in the new targets, said analysts.

“It’s told us that in the mid-term, that’s about four years or five years, it (Rolls) can do 1.9 billion pounds. If it does that then it’s a cheap stock,” he said.

Morgan Stanley analysts praised the company and its leadership, saying the new targets showed a “ruthless focus on optimising investment” and “the emerging benefits of increased focus and rigour”.

Rolls on Friday also showcased its often-overlooked power systems unit, saying that the business will drive some of its future growth by achieving revenue growth of 3 to 5 percent above underlying GDP, and an operating profit margin in the mid-teens, up from 11.3 percent in 2017.

It said it would be able to offset those costs through “short-term discretionary cost mitigation actions”.

Asked if the Trent 1000 issues could also become problems on other engine programs, the Trent XWB and the Trent 7000, East said he was confident that would not happen.