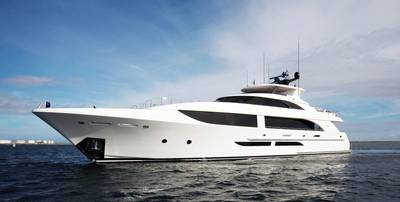 Rolls-Royce is delivering its new generation mtu Series 2000 engines which comply with the strict emissions regulations IMO III and EPA Tier 3 for a Westport 125 yacht. It's the first time these engines are delivered for a yacht to be built in the US.

Rolls-Royce said Wednesday it would deliver its new generation mtu Series 2000 engines which comply with the strict emissions regulations IMO III and EPA Tier 3 Recreational for the first time for a yacht to be built in the US.

The engines will be installed in a Westport 125 yacht. Rolls-Royce is also delivering its automation solution mtu NautIQ Blue Vision NG for monitoring and control of the yacht’s propulsion system.

The 38m yacht will be built in Westport Yachts’ shipyard in Westport, Washington, USA.

Daryl Wakefield, President of Westport Yachts, said: “We are proud to have Rolls-Royce’s cleanest mtu marine engines in our newest motoryacht. They ensure maximum power, reliability and ease of mind to our customers who can concentrate on enjoying their yachting adventures.”

Christof von Bank, Director, Marine, Americas at Rolls-Royce business unit Power Systems, said: "It’s fantastic to be pioneering our new and most environmentally friendly generation of the proven mtu Series 2000 with our partner Westport. This is an important milestone for the next evolutionary stage of this engine series as well as for our efforts to become a provider of integrated sustainable solutions.”

The IMO III certification of the propulsion system will enable the Westport 125 to sail in particularly emissions-protected areas, which are defined as ECA zones, such as the US & Canadian coast, and the North and Baltic Seas, Rolls-Royce explained.

The company also said it would approve the use of sustainable fuels, such as synthetic diesel (second generation biofuels or e-diesel) from 2023 in the new generation of its mtu Series 2000 and 4000 engines, "enabling climate-neutral operation in almost all applications."

In addition to the use of sustainable fuels, the company also said it was building on new technologies such as CO2-free fuel cell systems and methanol engines.