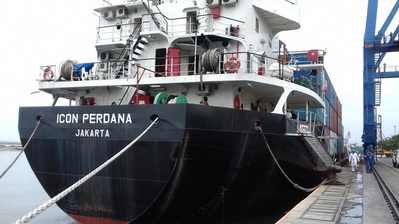 Calculations made immediately after comparative trials for the Indonesian shipping line showed that a 58% cut in lubricant costs is available to ICON Line through the use of Shell Gadinia S3. Annualized, this is equivalent to saving  $16,900 per vessel.

ICON Line had been seeking a way to extend intervals between engine oil draining and replenishment on three of its four containerships without compromising on performance. The aim was to cut costs while also improving operational efficiency and reliability by reducing the risk of unplanned downtime. After a technical assessment of ICON Line’s existing engine oil use, Shell Marine’s team and local distributor PT Cahaya Samoedera Bersaudara recommended trialing Shell Gadinia S3 40. In addition, a high level of performance has been demonstrated in real operations on a number of different engine makes and models, including Wärtsilä 8L20; MAN 8L21, Caterpillar MaK 8M20 and Bergen C25:33L6A.

Shell Gadinia S3 40 is a high-quality, multi-functional diesel engine lubricant which is particularly suited for medium-speed main or auxiliary engines burning fuels with sulphur contents up to 1%, protecting against oxidization and thermal degradation and minimizing lacquering. The engine oil can also help extend engine life by reducing deposit formation in the piston ring belt and cylinder liners, by reducing the risk of ring sticking and breakage.