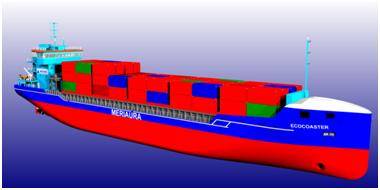 Each state-of-the-art 4700 dwt VG EcoCoaster, designed by Meriaura Group together with partners Foreship and Aker Arctic Technology, will feature COMPAC bearings, a Thordon Water Quality Package and a forward shaft seal in order to exceed current and anticipated environmental regulations.

Duwel Group’s Sales Manager in Finland, Thomas Forsell, said, “Meriaura Group’s new vessels have been specifically designed with the environment in mind and our COMPAC solution means these sophisticated ships will operate without the risk of operational oil leaking from the stern. The owner wanted the best possible technical solution and the COMPAC system together with the Thordon15-year bearing wear-life guarantee is not only the best technical solution it’s the most environmentally-safe one.”

“The revolutionary hull form minimises drag, enhances the propeller wake field and optimises the ratio between capacity and fuel consumption which, compared to similar vessels, helps us achieve our emissions reduction target. It would have made no sense to counter these environmental and efficiency gains with a propeller bearing system with a potential risk of leaking lubrication oil to sea. The COMPAC system not only removes this risk but reduces vessel operational costs without detriment to performance.”

Jussi Mälkiä, President of Meriaura Group, said in a statement posted on the company website: “Our goal is that in five years’ time at least 50 percent of our fleet will consist of fuel efficient and low emission EcoCoasters that are run on biofuel produced from recycled oils.”

Thordon Bearings’ Head of Marketing and Customer Service, Craig Carter, said, “When delivered, these two new ice-class EcoCoasters will be the most energy efficient dry cargo ships to operate with a COMPAC system. Fuel consumption and emissions is almost half compared to conventional, similar sized tonnage.”

The single screw vessels’ dual fuel ABC 8DZC main engine will be capable of burning biofuel in addition to marine gas oil (MGO), while additional power for ice conditions will be provided by a diesel electric booster system.

Delivery of the first VG EcoCoaster  is due at the end of July, 2016 with the second following in October, after which they will be operated by Meriaura subsidiary, VG Shipping.