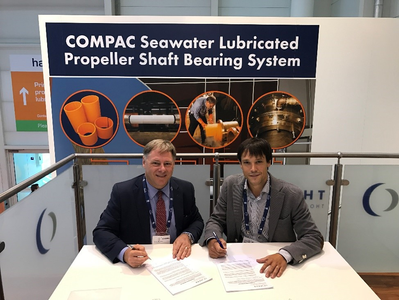 Thordon Bearings confirmed it signed a new sales and distribution agreement during the recent SMM 2018 trade show in Hamburg, Germany.

Thordon Bearings’ CEO Terry McGowan said: “Spain, Gibraltar and Morocco are important market sectors for Thordon Bearings, not only for our established commercial marine business but also for our activities in the hydro-power sector. Echetalde, under the stewardship of partners Iñigo Arrancudiaga and Xabier Arana, whom we’ve worked with for a number of years now, put forward an excellent succession plan following Pedro’s retirement, which means a seamless transition for our distribution network and customers in the region.”

Since Echetalde began operating it has been quick to establish itself as Thordon’s distributor in the region, having secured  contracts to supply a range of non-metallic vertical pump bearings to Spain’s industrial sector. The company has also presented a number of new supply opportunities for Thordon products in the region, as Echetalde partner Xabier Arana explained.

Echetalde is based in San Sebastian, Spain, and will carry out sales, distribution and engineering services for all Thordon products across Spain, Gibraltar and Morocco.