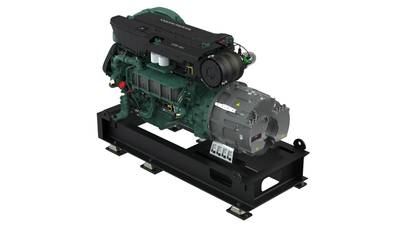 Volvo Penta on Thursday announced the launch of a new range of variable speed marine generator sets – a key enabler for electric propulsion for marine vessels – as the industry's transformation toward sustainable marine propulsion continues to gain momentum.

Now a standard part of the Volvo Penta marine offer, the range of variable speed marine generator sets allows shipyards to install hybrid-electric modular propulsion systems today. According to Volvo Penta, the move toward modular propulsion enables operators to invest in new vessels with the peace of mind that they are built ready and adaptable for emerging alternative energy sources.

The variable speed marine generator sets make it possible to build vessels with smaller battery banks and charge them while on the move, which makes the switch to hybrid-electric marine propulsion more cost-efficient and accessible today. This technology is already being used by Volvo Penta customers, such as Swedish Transport Administration and MHO-Co.

With the technology now working efficiently in proven, real-world applications, Volvo Penta is offering the range with models starting from D8, 190 kWe and running up to 545 KWe for the D16. Adding to the range’s ability to improve an operation’s sustainability credentials, all Volvo Penta diesel engines can run on HVO 100 fuel, instead of standard diesel, to reduce fossil CO2 emissions by up to 90%.

A typical installation sees a modular series of variable speed marine generator sets installed to power electric drives with or without battery packs. This direct current (DC) grid system is easy to upgrade with alternative power sources and has fewer components, weighing less – especially when compared to batteries as the sole energy carrier – making the vessel more efficient. The modular installation also creates the option of using the minimum number of engines to deliver the power needed so that the marine generator sets are able to run in the efficiency sweet spot.

The flexibility of a modular installation is further amplified by the fact that the new Volvo Penta variable speed marine generator sets, in each of the respective power ranges, are the most compact solutions that meet the latest IMO Tier III regulations, the manufacturer said. They’re also water-cooled, which means less noise and more efficiency for owners.