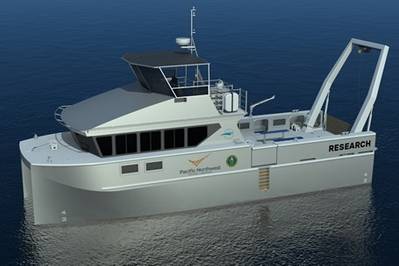 Danfoss Power Solutions’ Editron division has been chosen by the Pacific Power Group and Seattle shipbuilder Snow & Company to provide the drivetrain system powering the U.S. Department of Energy’s first hybrid-electric research vessel. Due to enter operation in February 2023, the vessel will be used by PNNL-Sequim.

The Pacific Northwest National Laboratory (PNNL) is a research center specializing in research advancing sustainable energy through decarbonization and energy storage. The new research vessel will enable PNNL-Sequim to carry out the testing and research needed to support renewable power from the ocean.

The Editron division will equip the vessel with electric permanent magnet motors, with Volvo Penta providing the diesel engines. The diesel engines will be used when cruising at fast speeds up to 20 knots and over long ranges up to 3000 nautical miles. The electric motor will be used when conducting slow-speed research work for longer durations of up to 6 hours. Additionally, the electric machines will be able to charge the Spear Power Systems energy storage system aboard the vessel.

The Editron division will also provide the complete system delivery of the electric drivetrain, including the DC grid, power and energy management systems, electric PM-motors and PM-generators, and compact and lightweight inverters and DC/DC converters. Danfoss’ Editron division will supervise the project execution, including engineering, project management, sea trials and onboard training.

Erno Tenhunen, marine director of Danfoss’ Editron division, said, “This project shows the potential that hybrid power can unlock by enabling more flexible operations. Being equipped with both a diesel and electric motor, the vessel will be able operate either at high speeds and long ranges, or more quietly and energy-efficiently for longer durations.”

Bill Mossey, President at Pacific Power Group, said, “Its especially exciting to be engaged in a project that will be part of learnings and further development towards decarbonizing marine propulsion systems.”

The project is due for completion by March 2023.