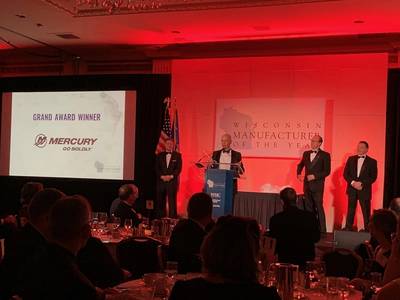 Mercury Marine was named Wisconsin Manufacturer of the Year on Thursday night in the Mega category at the annual awards ceremony in Milwaukee.

This marks the third time the Fond du Lac based company which is the largest division of Brunswick Corporation (NYSE: BC), has won this prestigious award.  Mercury Marine, which also was named Wisconsin Manufacturer of the Year in 2006 and 2014, is celebrating its 80th anniversary in 2019.

Manufacturer of the Year awards are presented annually by the Wisconsin Manufacturers and Commerce (WMC) to Wisconsin-based companies that produce world-class products and create employment opportunities for the communities in which they are located.

Some of the many highlights from Mercury’s record year in 2018 are:

• Accomplishing the largest major new-product rollout company history, including the introduction of 19 new V-6 & V-8 outboard engines and 26 new engines in total (on average, Mercury has released one major new product every six weeks for the past six years) setting the pace for marine innovation;
• Breaking ground for, and completing construction of, a 20,000-square-foot research facility, and making major upgrades to other facilities;
• Installing and implementing new, automated and highly efficient manufacturing equipment;
• Adopting new manufacturing processes and nimbly adapting them for higher output when product demand exceeded expectations;
• Acquiring Wisconsin-based Power Products, a major manufacturer of parts and accessories, to integrate with Mercury’s product portfolio and to enhance consumers’ overall boating experiences;
• Expanding our workforce by 12 percent to support increased production in response to unprecedented product demand;
• Setting new records for charitable giving and volunteer service in the communities where Mercury operates.

Mercury surpassed $3B in sales in 2018 for the first time in company history and will continue to celebrate its 80th anniversary throughout the year with its employees and customers.

Mercury’s impact on Wisconsin has been well documented.

A recent study done in 2017 by the Fond du Lac Economic Development Corporation, now known as Envision Fond du Lac, shows that Mercury has an annual impact of more than $4B on the Fond du Lac economy.  In addition, Mercury invests more than $250MM in annual wages and benefits in 2017, and more than 80% of contracted work at the facility is awarded to Wisconsin based companies.  In 2018, Mercury was awarded its 8th consecutive Green Masters designation in the state of Wisconsin and has won multiple awards for sustainability and innovation around the world.