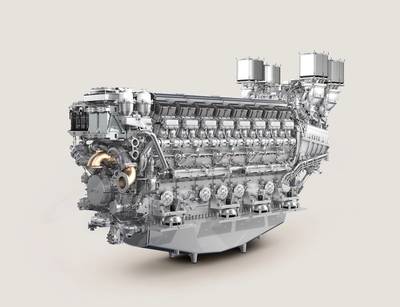 The new MTU 16V 8000 delivers outputs of up to 8000 kW and expands MTU’s portfolio not only for naval applications, but in the yacht and ferry segment too. (Photo: Rolls-Royce)

Rolls-Royce will be showcasing its MTU drive and propulsion solutions for military vehicles and naval vessels at the IDEX and NAVDEX 2017 trade shows (Booth 09-B14).

These take place simultaneously in Abu Dhabi from February 19- 23,  and represent the biggest defence technology event in the Middle East and North Africa. The venue is the Abu Dhabi National Exhibition Centre in the United Arab Emirates. Rolls-Royce will be presenting the full spectrum of its MTU-brand drive and propulsion solutions – from ultra-modern armoured-vehicle drives to its newly developed main propulsion engine for large governmental vessels. The MTU brand is part of Rolls-Royce Power Systems.

On the naval side, Rolls-Royce will be unveiling a model of its new Series 8000 16V engine. This unit delivers outputs of up to 8000 kW and expands MTU’s portfolio not only for naval applications, but in the yacht and ferry segment too. The Series 8000 unit is a highly renowned engine equipped with common rail fuel injection and electronic engine management for low overall running costs, high power density, and unlimited low-load operation – a significant advantage for governmental vessels. The Series 8000 unit is the top-selling engine in this application.
Another showpiece will be a model of Rolls-Royce’s evolved MTU-brand Series 4000 diesel engine compliant with the IMO III and EPA Tier 4 emissions standards. This version is called 4000 M05, and its innovations in turbocharging, combustion, and fuel injection, as well as its newly developed SCR system are instrumental in enabling it to meet the stringent emissions rules. This integrated solution from MTU for propulsion and SCR exhaust aftertreatment provides the customer with a configuration that is optimally tuned to the IMO Tier III and EPA Tier 4 standards. The system is flexible, demands little space, and boasts an excellent power-to-weight ratio.
Rolls-Royce acts as system partner to both manufacturer and government authorities, so besides the engine is able to offer complete MTU-brand system solutions for drive and propulsion, automation, and service. It will be showcasing these capabilities at the trade shows using interactive models of complex marine propulsion systems such as Combined Diesel and Gas Turbine (CODAG) and Combined Diesel and Electrical Drive (CODAE) configurations, each featuring various MTU engines for main propulsion and gensets for on-board power.
Rolls-Royce also has a new showpiece for armoured vehicles – and will be using a model of modular structure to demonstrate the compact nature of MTU’s Series 890 PowerPacks for military applications. The exceptionally high power density and low space requirement of Series 890 units sets them apart. MTU has succeeded in reducing the weight and volume of this engine by some 60% relative to other engines for defence applications in the same power class. The power-to-weight ratio of one kilowatt of power to just under one kilogram of engine weight is unique in this type of application. The low-weight, small-volume engine offers exceptional flexibility when it comes to integrating it into new or existing vehicles, making the Series 890 engine the ideal solution for upcoming armoured vehicle projects. The PowerPack is already in service in the Puma, the infantry fighting vehicle used by the German Armed Forces, and besides the engine comprises the transmission, starter-generator and cooling and air filtration systems.
Also highly suitable for current MBT-upgrading projects is the MTU Euro-PowerPack. It is based on a Series 880 unit and available with rated powers of 1,100 kW (1,500 HP) to 1,200 kW (1,630 HP). The Euro-PowerPack was specially developed for modern MBTs weighing over 60 tonnes. Rolls-Royce will also be showcasing a model at the IDEX exhibition.
• Abu Dhabi National Exhibition Centre • east Africa • Environmental Protection Agency
Email

U.S.-based Fairbanks Morse said it has been awarded a purchase order by Huntington Ingalls Industries (HII) to build and…