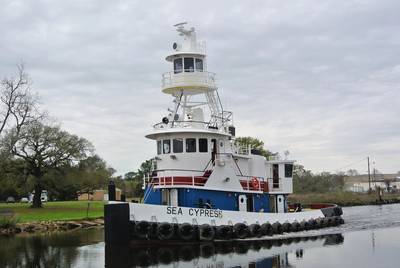 Cummins explain that over the years, Rodriguez Shipbuilding Inc, of Bayou LaBatre Alabama has probably delivered more shallow-draft tugs than any other US-yard. Their signature lugger-type tug design, with its distinctive aft cabin and wheelhouse, has a strong following amongst US Gulf Coast operators servicing near shore petro-operations.

The housework, built forward on this beamy hull, suggests a conventional G of M tug, but it is what is below the water line that will matter to the owner and charterers. The boat has a total of nearly 2000 HP generated by three 660-HP six-cylinder Cummins QSK19 marine engines each turning a propeller through Twin Disc MGX5222 gears with 6:1 ratios. The triple screw configuration allows the design to maintain a shallow ten-foot moulded depth and, depending on load conditions, operate in as little as eight feet of water.

Named the Sea Cypress, the new boat is built to a design by yard owner Joseph Rodriguez It is a near sister to the Sea Oak delivered to Garber Bros. in 2007.

Set up for both towing and pushing, the tug is fitted with SMATCO deck equipment including a waterfall type winch for anchor handling or towing. The stern deck winch also allows the versatile tug to make up to barges for pushing by way of a bridle running through stern deck rollers and side deck rollers.