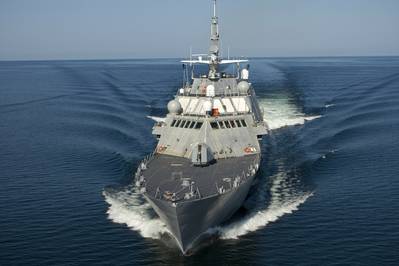 Rolls-Royce, the global power systems company, has secured a contract to supply power and propulsion systems for the two latest vessels in the U.S. Navy’s Littoral Combat Ship (LCS) program.

Designed to operate in combat zones close to the shore (littoral waters), each LCS will be equipped with two Rolls-Royce MT30 gas turbines, powering four large Mk1 water jets. This will enable the vessels to reach speeds in excess of 40 knots.

This latest order is for ships named Little Rock and Sioux City, and follows previous orders for the Milwaukee and the Detroit, which are both under construction. Rolls-Royce already powers two Lockheed Martin Littoral Combat Ships, the USS Freedom, which was deployed two years early, and the Fort Worth, which is due to complete trials later this spring.

“This order builds on the success of the Rolls-Royce powered Littoral Combat Ships to date, and we’re delighted that we will also power the Little Rock and the Sioux City,” said Andrew Marsh, Rolls-Royce President - Naval. “We have worked closely with Lockheed Martin, the U.S. Navy and other partners during the LCS program, using our extensive experience to further develop these highly-advanced ships. The combination of the MT30 gas turbine and our latest water jet technology will ensure that these ships are at the cutting edge of global naval capability.”

The MT30 is derived from Rolls-Royce aero engine technology and builds on over 45 million hours of operating experience. At 36 megawatts, it is the world’s most powerful marine gas turbine and has the highest power density - a key factor in naval propulsion, where delivering a high power output in a compact space is essential. The MT30 has also been selected for the U.S. Navy’s DDG-1000 Zumwalt class destroyer program, as well as the UK Royal Navy’s new Queen Elizabeth class aircraft carriers.

The water jets are among the largest produced by Rolls-Royce and can pump water at a combined rate of 25,000 gallons per second – enough to fill an Olympic-style swimming pool in 25 seconds.

In addition to gas turbines and water jets, a significant range of Rolls-Royce equipment is specified in the Lockheed Martin design, including shaft lines, bearings and propulsion system software.