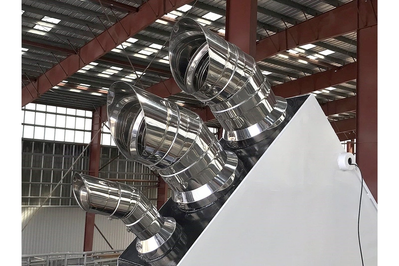 Seastreak's new Commodore-class high-speed catamaran ferry is launching with Delta "T" Systems/Dinak modular dry stack engine and generator exhausts, and related ventilation equipment. The 150' x 40' 600-passenger Incat-Crowther-designed vessel is being built by Gulf Craft of Franklin, Louisiana, and due to be delivered in April.

Delta "T" Systems/Dinak exhausts are modular, so installation is straightforward and fast—typically half the time. They're clamped together, not welded, thus reducing onsite labor costs. Components are manufactured from polished 304 and 316L stainless steel, with rock wool insulation. Duct diameters range from 3.15" to 31.5". An average system weighs 75% less than traditional black pipe—an important consideration with USCG K-class high-speed ferries like Seastreak's.

"We specified Delta "T" due to the success we've had from their engine room ventilation equipment including demisters, fans and fire dampening equipment that we currently have on our existing vessels," said Brian Achille, director of vessel engineering, Seastreak LLC. "High Speed vessels are extremely sensitive to weight, and the Delta "T" Systems/Dinak exhaust system is an all-in-one solution. There's no exposed insulation that needs to be installed by a third party, and because of the double wall design, there's less heat in the engine room, thus creating a safer environment for onboard crew."

A true luxury vessel, Seastreak's Commodore-class boasts high-end appointments, and entertainment and technology features. It will provide service between Wall Street and Monmouth County, New Jersey, making the run in under 40 minutes.