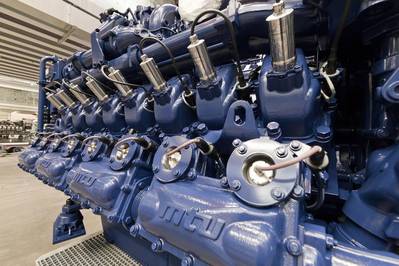 The main propulsion system of the Sembcorp hybrid tug comprises twin 16-cyclinder mtu Series 4000 gas units which will provide a combined total power of 2984 kilowatts. The new engines are part of Rolls-Royce's Green and High-Tech program. Without exhaust gas aftertreatment they emit no sulfur oxides and only very small quantities of nitrogen oxide and particulate mass is below the verification limit. (Photo: Rolls-Royce)

The harbor tug will be built by Sembcorp Marine Integrated Yard and operated in Singapore by Jurong Marine Services, a wholly owned subsidiary of Sembcorp Marine. The new LNG-hybrid tug is the first of 12 tugs that Sembcorp Marine plans to design and build to replace the existing diesel-powered ones between now and 2025.

LNG as a fuel virtually eliminates sulphur oxide emissions, while the Maritime Port Authority of Singapore (MPA) is also incentivizing its use to support the International Maritime Organization’s aims to halve ship CO2 emissions by 2050.

This is the first LNG-hybrid tug to be powered by mtu gas engines worldwide. Designed by LMG Marin (Norway), part of the Sembcorp Marine group, to deliver 65T Bollard Pull (BP) with ABS Class, the LNG-hybrid tug is estimated to be completed in the later part of 2021.

The main propulsion system of the tug comprises twin 16-cyclinder mtu Series 4000 gas units which will provide a combined total power of 2984 kilowatts at 1600 RPM (revolutions per minute). The new gas engines are able to deliver performance comparable to a high-speed diesel engine, according to Rolls-Royce. Equipped with multipoint fuel injection, dynamic engine control and enhanced turbocharging, the engines cater for dynamic acceleration capabilities, high power output and reduced emissions considerably below the current IMO III limits without the need for exhaust aftertreatment. The LNG-hybrid propulsion system will be able to provide flexibility to cater for various operational modes and is able to switch between low emission LNG engines and zero-emission battery power.

The groundbreaking tug will also feature ABB’s electric propulsion, power, energy storage, control and automation technology. The vessel will be able to deploy 904 kWh of battery power for zero-emission operation, as well as for peak shaving – improving utilization of electricity use on board.

According to ABB, gas fueled engines face a particular challenge when it comes to handling the fast-changing load capabilities demanded by tugs. Leveraging ABB's Onboard DC Grid system, the tug’s engines will be able to run at variable speeds for optimized LNG fuel economy at each load level.

Additionally, through integration with an energy storage source, the batteries will be able to provide power to the tug’s propulsion system almost instantaneously. Leveraging the capabilities of Onboard DC Grid, the LNG engines will not have the need to be tied to a fixed speed against dynamic loads, and would be able to provide energy at variable revolutions per minute (RPM), further enhancing efficiency, responsiveness and sustainability of tug operations. ABB’s scope of supply also includes the drives for the PTI/PTO variable speed shaft generator, which integrates with the energy storage battery.