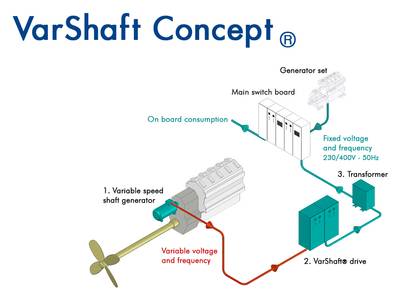 On the occasion of Electric & Hybrid Marine World Expo in Amsterdam, Barillec will focus on its VarShaft system, whose first prototype is now available in its showroom in Concarneau. VarShaft has been developed to improve energy efficiency of fishing boats and other service vessels.

According to Barillec, many French shipowners already showed interest into this concept that allows them to improve the energy efficiency by reducing the fuel consumption up to 15 percent.
Barillec marine proposes to ship-owners, especially from the fishing industry, an answer to the economical and environmental challenges of the fleet modernization and renewal. Barillec announced the development of this new marine apps on autumn 2015, and said feedback has been very positive with several requests made. Currently, several projects are being studied, particularly in cooperation with naval architects, to integrate Varshaft in the design of innovative vessels.
To answer the demand and to propose a standard system that could work in many different configurations – available power, fixed or variable pitch, etc. Barillec marine has built, on its own account, a prototype to bench the performance of the system. The first unit of VarShaft can deliver 60kVA of electrical power from 700 rpm to 2,200 rpm.
The aim of VarShaft is to supply an efficient, stable and qualitative electrical network, no matter of propulsion engine speed. By using electronic drives, a variable speed generator can deliver a fix voltage and frequency to the network. While meeting professional needs, propulsion engine runs more efficiently and burns less fuel. Thus, VarShaft reduces significantly greenhouse gases emissions, contributing to reduce the environmental impact.
VarShaft allows use of a fixed pitch shaft while offering enough power for a whole alternating current network. It provides power for traditional devices (pumps, hydraulic, chiller, etc.) that could be wisely fitted. It becomes easier to use and control the loads: this system avoids the stacking of auxiliary coupled on propulsion engine power take-off, always complex, hardly accessible and less efficient.
For VarShaft design, Barillec marine said it takes advantage of its expertise in electrical energy production, conversion and storage. It uses technologies and equipment already proven in other projects for boats that are currently sailing. Among those, the solutions used for Fish2EcoEnergy project lead to a reduction of 20 percent of the fuel consumption.
In favorable conditions for investment in new boats and equipment VarShaft is an effective and reliable answer to energy consumption and optimization matters, its developer said. While fuel prices are fairly low, return on investment is estimated between 24 and 48 months, depending on projects.
• energy consumption • energy efficiency
Email