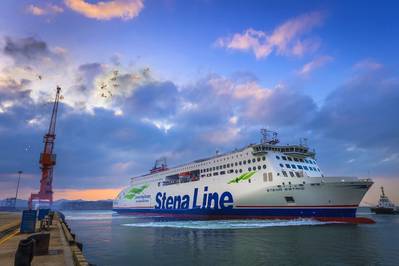 Stena Line’s "next-generation" ferry Stena Estrid has arrived in Holyhead after completing sea trials and a five-week, 10,000 mile journey from China to the Irish Sea where she will begin service early next year on her inaugural route from Dublin to Holyhead.

Designed by Deltamarin and constructed at the China Merchants Jinling Shipbuilding Weihai Shipyard in China, Stena Estrid is the first of Stena RoRo’s nine next-generation E-Flexer Ro-Pax vessels in a series which include five for Stena Line and several additional vessels that will be on long-term charter for other ferry operators.

The 215-meter-long Stena Estrid has space to carry 120 cars and 1,000 passengers, with a freight capacity of 3,100 lane meters, meaning a 50% increase in freight tonnage, according to Stena Line.

During sea trials, Stena Estrid made significant speed on two shaft lines as well as on one shaft line and the other in feathering mode, according to Caterpillar Marine, supplier of the vessel's MaK 12 M 43 C engines with a maximum output range of 12,600 kW (17,136 mhp) and twin-screw Cat Marine Propulsion drive trains with MPP 1410f feathering controllable pitch propellers, shafts and packaged gearboxes.

Manned by a reduced crew of 27, with no passengers on board, Estrid made a number of stops along the way to Holyhead to refuel and stock up on fresh provisions.

The first stage of the journey was a 2,657 nautical miles trip to Singapore, from where she progressed through the Malacca Straits to Galle in Sri Lanka, before crossing the Indian Ocean and making its way up through the Suez Canal.

A trip across the Mediterranean Sea took Stena Estrid to Algeciras where she was joined by Onboard Sales and Services crew members to undertake familiarization training during the final leg of her journey, which saw her travel through the Atlantic Ocean and across the Bay of Biscay before finally arriving at her new home.

Stena Estrid sailed into the Welsh port at approximately 7 a.m. Monday, following a brief stop in Dublin for a berthing trial.

The vessel will now undergo final preparations before starting service in mid-January.

A further two of the new ferries are also destined for the Irish Sea with Stena Edda expected to commence operations from Liverpool to Belfast next spring, and a third vessel Stena Embla to be introduced on the same route in early 2021.

The introduction of these two ships will increase freight capacity on the Liverpool to Belfast route by 20%, Stena Line said.