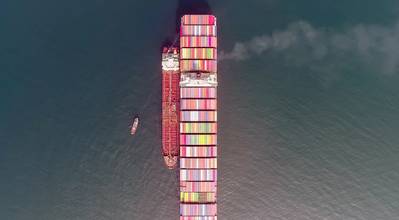 The final quarter of 2019 marked a massive decline of high-sulphur fuel oil (HSFO) sales, as the industry transitioned into compliance of the International Maritime Organization's (IMO) 2020 Sulphur Cap (IMO 2020). In Singapore, the world’s largest bunkering hub, the bunker sale landscape saw significant change as the sale of high-sulphur fuel oil dropped tremendously in a matter of months. In contrast, the sale of low-sulphur fuels skyrocketed in the final quarter.

“The shipping industry has been riddled with market uncertainty in recent months, but the bunker sales in the port of Singapore provide one of the first readings as to how the industry has transitioned into compliance with the IMO 2020 regulation. We have now surpassed the first wave of IMO 2020 and hopefully the accompanying market uncertainty will diminish as we proceed into 2020,” said BIMCO’s Chief Shipping Analyst, Peter Sand. 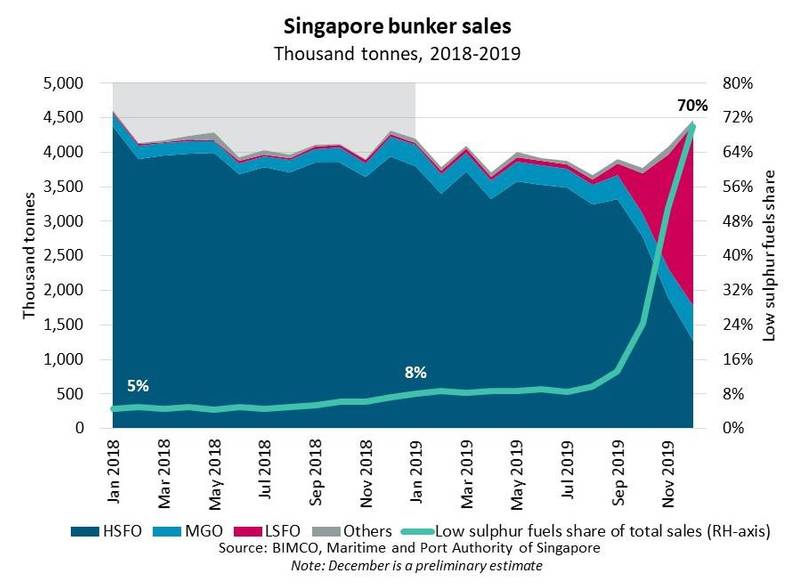 The shift in bunker sales
In December, a total of 2.630 million metric tons of LSFO were sold, accounting for 59% of total sales. This is a massive change considering that it accounted for roughly 1% of total sales in the last couple of years. However, total 2019 bunker sales in Singapore were down 4% year-on-year, the lowest level since 2015.

The December figures provide insight into the IMO 2020 transition and how the upcoming year might unfold. At the start of 2019, low-sulphur fuels accounted for a mere 8% of total sales compared with a jump to 70% in December. The massive uptick in market share of low-sulphur fuels illustrate the first wave of IMO 2020, but BIMCO does not necessarily expect the low-sulphur to high-sulphur sales ratio to remain at these levels in the coming year.

The bunker market in the port of Rotterdam, approximately one sixth the size of the Singaporean market, exhibited the same trend in November. Here, the sale of HSFO declined substantially while low-sulphur fuels rose to 50% of total bunker sales. 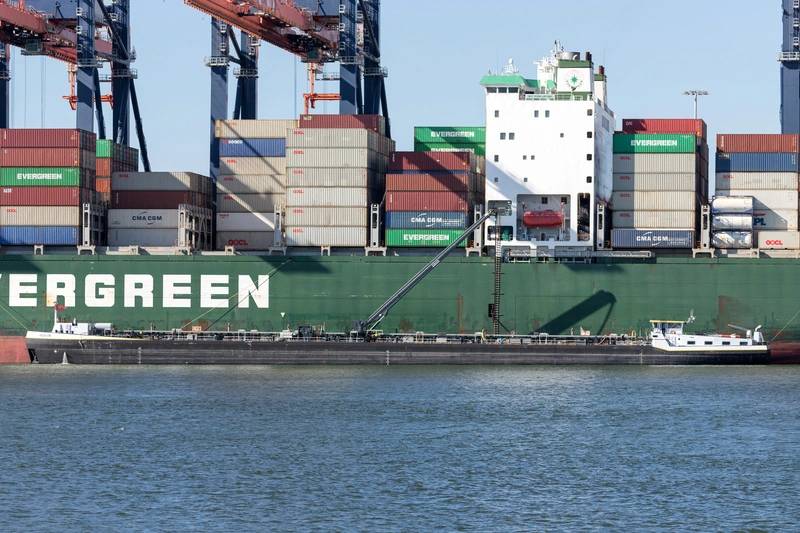 Transitioning into the new reality
The shift in bunker sales underlines the massive transition that the shipping industry has been faced with at the turn of the decade. Whereas bunker suppliers began their IMO 2020 transition in the third quarter of 2019, many shipowners waited until the last minute to transit. The late transition has seemingly allowed shipowners to benefit from the declining HSFO prices in recent months, while also burning off the remaining HSFO left in the tanks.

The price of HSFO started to spike dramatically in 2019, driven largely by geopolitics and bunker suppliers preparing for IMO 2020. 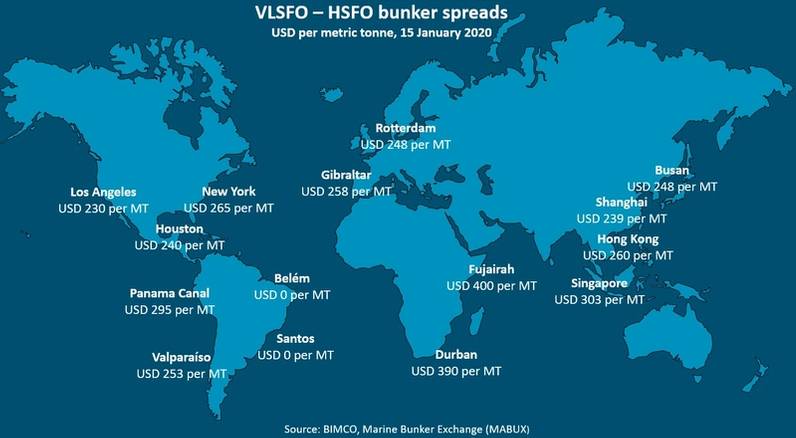 The low-sulphur to high-sulphur spread widened towards record-breaking territory around the implementation deadline of IMO 2020, driven by rising low-sulphur fuel prices. However, two weeks into the new year the spread has started to narrow slightly, which could indicate that the global fleet has bunkered sufficiently for the first wave of the transition, as also evidenced by the bunker sales in Singapore.

A second wave will surely set into motion once the fleet has burned through the initial supply of low-sulphur fuels. Whether the spread will follow along the same lines and widen at that point remains uncertain, but it seems likely that the spread might narrow in the coming months, as the fog of IMO 2020 uncertainty clears.

VLSFO – the silver bullet for IMO 2020?
An array of different compliant distillates has emerged in the market to facilitate compliance. While the IMO 2020 sets out a regulatory framework for the shipping industry, it does not issue mandatory uniform requirements for the properties of distillate blends. To some degree, this contributes to the uncertainty regarding bunker incompatibility. Two different fuel blends with the same specifications are not necessarily compatible. Bunkering very-low-sulphur fuel oil (VLSFO) from a bunker supplier in one port is not necessarily compatible with VLSFO bunkered in another.

VLSFO has been labelled as the silver bullet for the IMO 2020 market. Yet, up until the fourth quarter of 2019, VLSFO was only available in a few select ports, but at an attractive price discount to MGO LS. However, In December 2019, the MGO LS and VLSFO reached price parity in Singapore, seemingly on the back of higher demand for VLSFO. 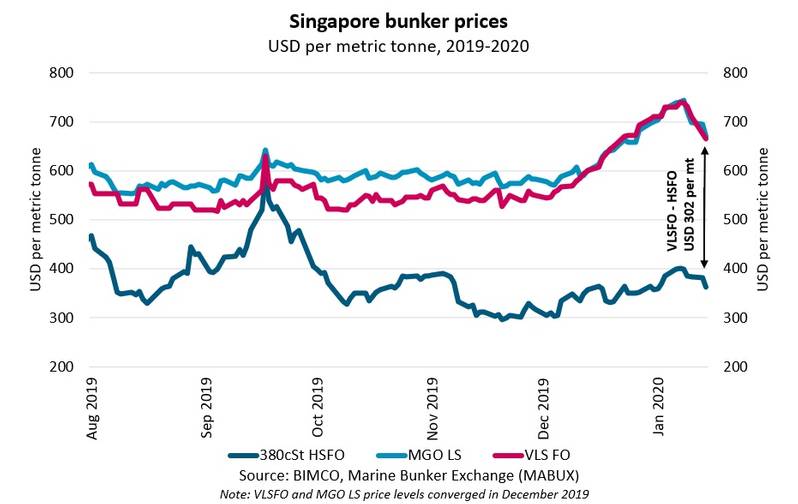 The rising cost of low-sulphur fuels illustrates the massive challenge that shipowners have been faced with overnight. At current price spreads, fuel oil costs have effectively doubled, putting heavy financial pressure on companies that must bear the cost burden themselves. The first-mover advantage associated with scrubbers seems to hold true for the time being.

“Almost from one day to another, IMO 2020 has resulted in a massive increase in bunkering costs for shipowners and operators, costs which for many companies cannot be sustained for a prolonged period. Shipowners are trying to pass on the additional costs of bunkering to customers, but if the underlying supply and demand fundamentals are not balanced, their efforts may prove futile,” Sand said.

While the industry adjusts to the new reality of IMO 2020, another crucial part of the regulation is approaching hastily. On March 1, 2020, the HSFO carriage ban takes effect, which prohibits ships without an exhaust gas cleaning system (scrubber) to even carry bunker fuels with sulphur content above 0.5%.