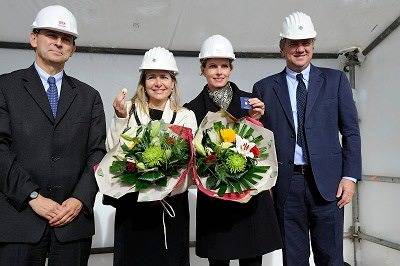 At the STX shipyard in Saint-Nazaire, France, two commemorative coins are welded to 'MSC Preziosa’s' mast radar, to mark a construction milestone.

Earlier this year, following the termination of the agreement with the original owner, MSC Cruises signed a contract to take over the 140,000-ton cruise ship. Renamed MSC Preziosa, she will be the 13th addition to the MSC Cruises’ fleet, as well as the fourth ship in the series of Fantasia class ships.

Laurent Castaing, general manager of STX France, said, "I would like to take this opportunity to congratulate both the MSC Cruises and STX teams for their joint commitment.  Impressive shipbuilding figures illustrate the ambition which is at the heart of the Fantasia class project: 30,000 tons of steel, 1,242 miles of cables, 1,751 guest staterooms and, at the moment, 1,000 people working every day on MSC Preziosa."

The honor of presenting the coins was given to MSC Cruises Head of Onboard Marketing Daniela Picco, who served as MSC godmother during the ceremony. She was joined by Jeannette Le Queau from STX France, who works closely with the MSC team and has been involved in the MSC story since the first new build orders arrived at Saint-Nazaire almost 10 years ago.