New Standard in Propulsion Efficiency and Onboard Comfort 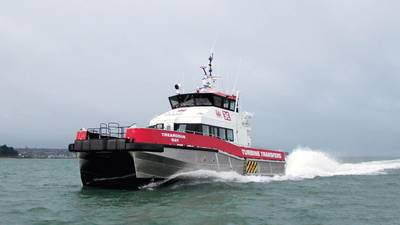 According to the manufacturer, the propulsion system has performed convincingly all along the line and surpassed the expectations of her owner, the Welsh company Turbine Transfers Ltd, a subsidiary of Holyhead Towing Company.

The VLJs are the main propulsion system of the DNV Classed 21m offshore service catamaran, which was designed for Turbine Transfers by BMT Nigel Gee and built by AMC. The Crew Transport Vessel will take service technicians to offshore wind farms at sites all around Europe, initially at the Westernmost Rough site off the Humber for Dong Energy. The CTV has achieved a trials speed of 30 knots, above expectations, compared to 26.5 knots for a near sister with jet propulsion. Even if the current installed ten cylinder 900 kW Diesels would be replaced for eight cylinder 720 kW Diesels the economical service speed of 25 knots required by Turbine Transfers would still be met.

“The vessel is achieving more thrust at high speeds, and when stopped in the water and pushing on a Turbine than with conventional systems, while achieving significantly lower noise and vibration levels,” stated Alistair Knowles, Marine Superintendent at Turbine Transfers. “Furthermore it improves our green credentials through substantial fuel and emission savings in our operations.”

The Voith engineers designed and developed the VLJ exclusively by computer, applying the CFD (Computational Fluid Dynamics) method. With a tradition of almost 150 years of hydro power development, Voith was one of the first adopters of the CFD technology. Today CFD is still becoming more and more powerful; making it possible to master even highly complex interaction effects.