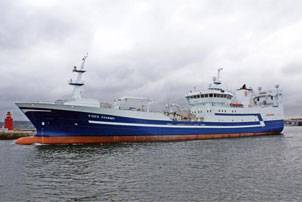 The purse seiner/trawler and factory vessel Kvannøy, which was built in 2002, has an advanced ship design and sophisticated propulsion technology. Examples are a reduction gearbox with two-step PTO, floating frequency, a large PTO/PTH shaft alternator/motor with a power boost function – where auxiliary engine power can be added to the propeller at peak requirements. Remarkable features and great propulsion flexibility were introduced already 10 years ago with this hybrid-like power concept in the Kvannøy newbuilding.

Today, Kvannøy’s innovative owners, Nyholmen AS from Bodø, have now have now retrofitted the vessel with an exhaust gas NOx reduction system. After a re-building process performed at MAN PrimeServ Frederikshavn, Denmark, the main engine has successfully been retrofitted with a HAM system. As a result, Kvannøy now operates the world’s first Humid Air Motor onboard a fishing vessel. It is also worth noting that this high-tech fishing vessel has become the world’s second HAM vessel of all types.

The main engine is an MAN 16V28/32A rated 3,920 kW at 775 r/min. The seatrial test results showed a NOx emission of only 3.6 g/kWh, measured according to the IMO MARPOL, E2 test cycle. This corresponds to a total NOx reduction of 61.3%, compared to the emission of the main engine running with its original charge air coolers – without HAM. The new HAM NOx level is 1.2 g/kWh above the IMO Tier III limit, and on an annual basis Kvannøy’s accumulated NOx emissions are reduced by 50 ton. The economic benefits are annual savings of $131,360 due to reduced NOx taxes for operation within Norwegian waters. Consequently, the calculated payback time for the HAM retrofit is approx. three years.

HAM systems have already been thoroughly tested and proven in operation in two stationary diesel power plants, and additionally for more than 10 years of successful operation onboard the Viking Line-operated cruise ferry Mariella. The Mariella is powered by four S.E.M.T. Pielstick engines, type 12VPC2.6. MAN Diesel & Turbo SAS, France (which was formerly S.E.M.T. Pielstick) originally developed the HAM concept, and has continuously gained good operational knowledge of it.

With the HAM system, the turbocharger charge air is saturated with sea water vapour before it enters the charge air channels and engine combustion chambers. As a result, the temperature peaks in the combustion process are lowered, and the formation of NOx is reduced.

The HAM system layout and installation onboard Kvannøy was performed in close cooperation with the DNV classification society. Additionally DNV carried out the final emission analysis, including NOx measurements during seatrial – running the main engine both with and without HAM. MAN PrimeServ’s Service Center Denmark, Frederikshavn handled the installation and engine retrofit in cooperation with their French colleagues and HAM experts. The HAM system units, as well as the control and monitoring equipment, have been supplied by MAN Diesel & Turbo France SAS, Saint-Nazaire, France.