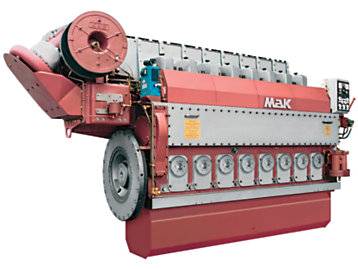 According to the manufacturer, updates include reduced part load fuel consumption, improved engine load response capabilities and a five percentage higher rating over the existing platform, increasing the power output to 350 kW per cylinder. First engines of the enhanced M 25 C engine platform will be available by the end of 2014.

“It was critical for us to engineer efficiency, loading capabilities and power improvements into the platform without sacrificing the durability and reliability the M 25 C is known for throughout the industry,” Detlef Kirste, Caterpillar Marine MaK product definition manager stated. “We wanted to give our customers increased operational flexibility which do support state of the art propulsion technologies and the new M 25 C is designed for both traditional mechanical-and electric propulsion systems as well as electric propulsion systems, which do require variable engine speed capabilities.”

Manufactured in Kiel, Germany, the M 25 C will be offered in 6, 8 and 9 cylinder configurations. The platform will meet IMO II emissions regulations in its standard configuration and is designed to support the operation of Selective Catalytic Reduction (SCR) systems in order to comply with IMO III emission regulations.

The engine will also feature the new Caterpillar Monitoring Alarm and Control System (MACS) which will provide additional functionality regarding engine control, diagnostics and remote monitoring, including the option to extend these functions to control and monitor engine related systems as required for the operation of SCR’s.