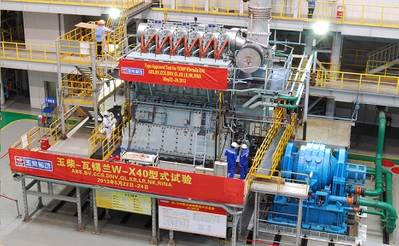 In passing the TAT, the engine is verified as having fulfilled all classification society requirements, and will be fully introduced to the market following its sea trials, which are now being undertaken. A feature of the testing was meeting the SOLAS (Safety of Life at Sea) standards. With a single engine powering the propeller, the engine must be capable of continuous operation under all conditions.

The Wärtsilä X40 as well as the Wärtsilä X35 engines feature Wärtsilä's second-generation version of its electronically controlled common rail system with time controlled fuel injection. The Wärtsilä Generation X Engines feature a higher stroke to bore ratio thus achieving lower engine speed and lower brake specific fuel consumption (BSFC). With this technology the fuel injection for each cylinder, as well as the cylinder lubrication, is controlled by a single module to provide excellent fuel efficiency and reliability as well as lower operational costs. The engine also incorporates the state-of-the-art UNIC-flex control system, which is based on Wärtsilä's UNIC (Unified Controls) platform.

"The TAT validation procedure is comprehensive and very demanding and we are delighted to announce that the Wärtsilä X40 engine has passed this milestone with flying colours. The key value adding feature of this engine is that its high level of efficiency lowers the operational costs for owners, operators and charterers. In the current market conditions, this is extremely important," said Mr. Martin Wernli, Managing Director, Wärtsilä Switzerland and Vice President, Wärtsilä Ship Power, two-stroke.

The Wärtsilä X40 and Wärtsilä X35 cover the small-bore end of the market. The engines will be used for smaller bulk carriers, product tankers and container feeder vessels. It is a segment where Wärtsilä is making its presence increasingly felt after not having been present for a number of years.

Ocean Infinity won The Clean Maritime Demonstration Competition, enabling it and its partners to build a Marine Propulsion Test facility…