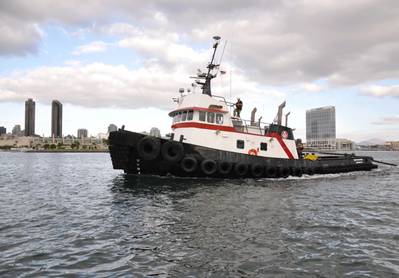 Pacific Tugboat Service, a member of the Port of San Diego's Green Business Network, has converted its fleet of 20 vessels.

Shore power, also known as cold ironing, is the process of switching from a ship's onboard diesel power supply to shore-based electrical power while the ship is at the dock. This process reduces polluting air emissions and noise levels from idling engines.

"I think the Green Business Network taught us is that we're not just a small business trying to make a living on the Bay, but we're a neighbor," said Pacific Tugboat Service Vice President Stephen Frailey. "We have a park near us, we have a neighborhood near us. Our contribution back to that neighborhood is to try to improve the environment."

The conversion was part of a $3 million overall upgrade the company's facility at the Crosby Street Pier , located at the Port's Tenth Avenue Marine Terminal. About $500,000 went to installing charging stations and retrofitting vessels so they could plug in.
The project was made possible by San Diego Gas & Electric (SDG&E), which helped upgrade power to the charging stations, and a funding grant from the County of San Diego's Air Pollution Control District.

Frailey said the immediate benefits are air quality and noise pollution, since the engines are shut off.

The company's vessel fleet now includes more than 20 tugs that divide time between the San Diego headquarters and offices in the Long Beach-Los Angeles area. Pacific Tugboat Services has several large contracts, including jobs with the Navy, pile driving, and crane services for both land and sea.

As part of its role as an environmental steward, the Port of San Diego established the Green Business Network. It's made up of 67 tenants businesses, including Pacific Tugboat Services, working to reduce energy consumption, water use, waste, and prevent pollution.

The Port of San Diego also utilizes shore power at its B Street Cruise Ship Terminal and the Port Pavilion on Broadway Pier.