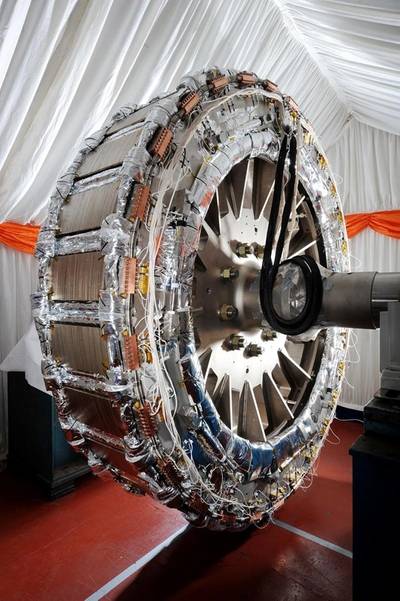 The company completed trials of Hydrogenie, a power generator incorporating technologies that enable highly efficient production of electricity in a small space. Hydrogenie makes use of superconductors instead of copper for the rotor windings on the motor, operating at 43 Kelvin or -230°C. It was tested late last year up to and well beyond its full rated load 1.7 MW spinning at 214 rpm and met expectations and design predictions. The tests were carried out at a GE Power Conversion facility in Rugby, England.

Until recently, superconductivity could only be achieved at around 4K (-269°C). But new high temperature superconductors (HTS) exhibit the phenomenon at much higher temperatures. Such machines will need less complex insulation systems and less powerful cooling than used hitherto on devices such as medical MRI magnets.

Latest superconductors are made by depositing a superconducting layer of ceramic onto a relatively cheap base metal. They have virtually no resistance to electrical current when cooled to very low temperatures, so windings can be made with wires having a cross section around 2% of a conventional copper wire winding.

More windings can be fitted into electromagnet coils, resulting in a higher power magnet that is substantially smaller or lighter than before. Superconductivity offers significant advantages in efficiency and significant weight reductions compared with conventional machines. The greatest benefits in terms of size and mass reduction are for applications where high torque machines are typically used, most likely as a direct-drive application in installations such as wind turbines, ship propulsion or run-of-river hydro plants.

GE has overcome technical challenges relating to the cryogenic cooling and thermal insulation required to keep the superconductors at the required temperature. Extremely cold helium gas is piped through a rotating coupling into the machine rotor and then circulated around the individual coils.

The rotor is located inside a vacuum, but still has some direct contact, via its shaft, with the outside world. This creates issues relating to the massive temperature differences along the shaft.

The machine incorporates a patented method for transferring torque from cold HTS coils to the machine rotor. Low resistance thermal joints and assemblies ensure that low cooling power is required to cool the coils. In fact, the machine demonstrates all of the technologies required to make HTS machines a commercial reality. GE’s Power Conversion business did much of the development of the Hydrogenie 1.7 MW 214 rpm HTS generator as part of the E.U. Framework Program 6 funded project that ran between 2006 and 2010.

The successful completion of the Hydrogenie project will set the framework for continued research and development in the study of superconducting machines. One specific area that may potentially benefit in the future is the upgrading of older run-of-river power plants. Coupled with running the machine/turbine at variable speed the benefits could allow efficiency improvements of up to 12% at part load.

The technology building blocks developed as part of the project also will be used in other businesses where high torque and slow speed machines are in use. The most immediate areas of demand are in wind power generation and in marine propulsion.

A superconducting wind turbine generator may permit significant reductions of mass mounted on the tower, thus helping to reduce the cost for the tower itself and its foundations. Recent studies conducted for GE Power Conversion show that the lifetime energy saving for a superconducting wind turbine compared to a conventional machine could be as much as 20 percent for offshore or desert machines above 10 MW.

On ships, HTS technology combined with DC or variable AC systems can result in up to 4 percent fuel savings, while the reduced size of the motors will be attractive to naval architects leaving more space for payload or passengers.

Motor-Services Hugo Stamp, Inc. (MSHS) a provider of diesel engine products and services, has entered into a definitive acquisition…